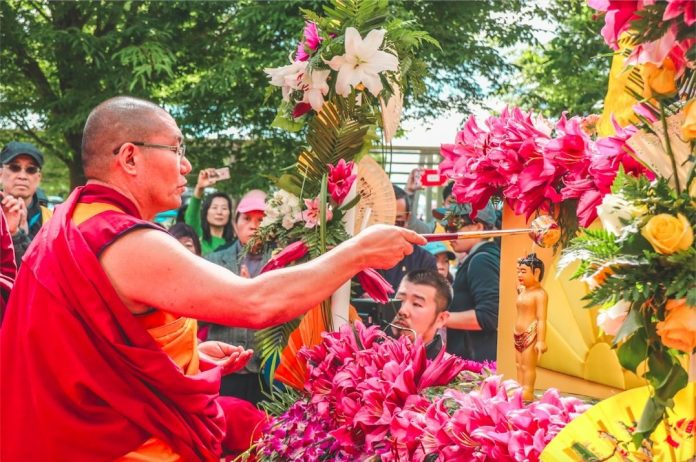 THE highlight of this year’s BC Buddhist Festival is the arrival of two very precious relics which are the remains of Buddha’s body from Sri Lanka. A high Buddhist priest will accompany these relics from Sri Lanka, and the festival will also receive a high priest from Thailand among other countries, according to a press release.

Saturday, June 8 marks the 5th year the BC Buddhist Festival will hold its celebration from 9:30 a.m. to 5:30 p.m. at the top of Queen Elizabeth Park.

Sixty-five different Buddhist temples across BC co-host this festival at Queen Elizabeth Park, 4600 Cambie Street – parking lot on top of the park.
Twenty-plus artists from various nationalities will have a Buddhist art exhibition.

The BC Buddhist Festival founder Tsengdok Rinpoche says: “The festival grew like a weed and it’s already our 5th year, which reflects the hunger of the everyday people who want to experience calm and tranquility in their heart. Modern people are suffering from so much loneliness and stress from being busy, acting like a chicken with its head cut off, running around without a clear goal or purpose. Our BC Buddhist Festival is designed to give them a different experience by showcasing the beauty of diversity of our philosophy, so that you can witness many schools of thought in our practice. We want visitors to feel the harmony of our collective desire for a more compassionate world, and more happiness in people’s hearts.”