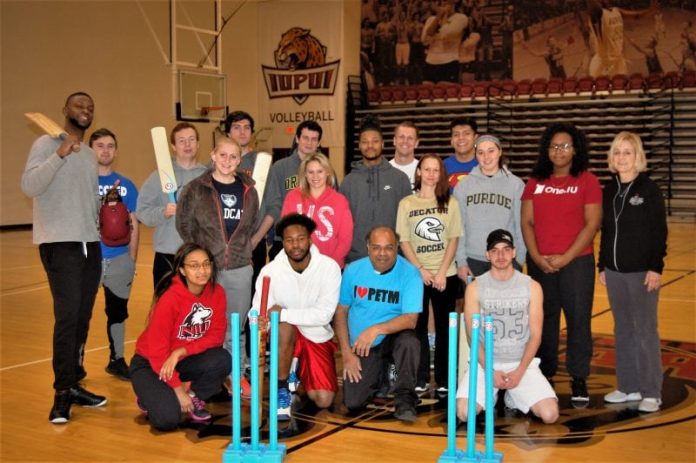 These students are going through cricket education in physical education class under Sandy Barnett of Indiana University’s Department of Kinesiology, Physical Education Lecturer for the IU School of Physical Education and Tourism Management – IUPUI campus, Indianapolis. During the fall semester since 2013 they get basic practical education in the game through on-field sessions at the end of the semester.
Patel gave basic practical cricket lesson, including throwing ball, catching, running between the wickets, bowling, playing strokes, wicketkeeping and proper use of batting crease. Patel explained that a batter (in baseball) is a known as a batsman, and a pitcher (in baseball) is a bowler in cricket. There is a lot of similarity between baseball and cricket. However, cricket is one of the most popular games in the world although a number of developed countries do not play this game.

The “future physical education teacher / coaches” were divided into groups to get practical experience in all vital departments of the game. Some students, including girls, displayed their skills in hitting as well as bowling with confidence and in a mature manner. The students used tennis balls and youth-size bats to experience the initial introduction to cricket.
Later, Patel, Director of Coaching and Convener for the Advisory and Judicial Committee for ACF as a Youth Cricket Representative, offered the students to have a feel of the wooden cricket bat, colored and white leather balls used for day and day-night cricket matches. He also displayed the safety equipment, including helmet, pads, gloves, thigh and arm pads, etc.
Indiana is the only state in US at the moment having such a cricket coach education program (introduced to five different colleges and universities), with the prime focus to develop future primary education program for schools based on the simple concept of “how PE teachers / coaches like to understand the game and how they wish /want to teach future scholars”

Meanwhile, USA Cricket has announced a number of zonal volunteer positions in the areas of performance, participation and membership with a view to continue to build the new USA Cricket. “As we look to expand our reach and deliver various activities within the community, local support will be helpful to realize the potential of these initiatives across the country,” said USA Cricket in a communication received here.
USA Cricket’s intention is to employ both full-time and part-time staff in the near future in the zones, however, “we feel it is important to hire such paid staff under the leadership of the newly elected Board. The roles will help to bridge that gap until USA Cricket can hire these positions and the voluntary roles will be reassessed once the Board is seated.” Keeping in mind these developments to promote cricket in USA, the IUPUI’s program and other college cricket education programs can play a significant role, says Patel.
The fifth batch from IUPUI, comprising 21 students who are going through cricket training this 2017 Fall semester, are: Nick Alford, Reggie Anderson, Terese Ariens, Shamari Bandy, Whitney Cosgray, Logan Duffy, Malcolm Gardner, Chelsea Hersley, Angie Keith, Hannah Nelson, Jonathan Osoria, Elleyana Passon, Ben Shealey, Yaz Shehadeh, Tyler Shorter, Colton Tumey, Rob Whitley, Roosevelt Williams, Angelo Wilson, Kane Woodall and Myquisha Zeigler.