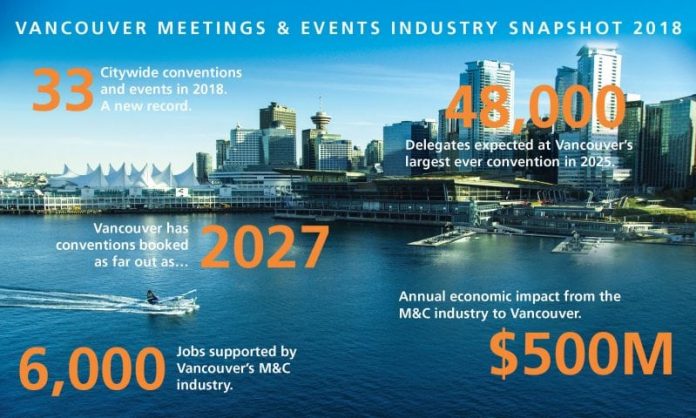 IN 2018, Vancouver will welcome 33 citywide conventions and events, the highest number the city has ever hosted in a single year.
Over the course of 2018, these 33 events will bring over 100,000 out-of-town delegates to Vancouver where they will inject money into the local economy through hotel stays, dining, attractions visits, shopping, transit and more.
In total, Vancouver’s meetings and conventions industry supports more than 6,000 jobs and results in over $300 million annually in director visitor spending and $500 million in economic impact for the Vancouver economy.
Vancouver companies and organizations also benefit as it gives them the opportunity to connect with their worldwide industry peers, and puts their companies, and their fields, in a national or international arena.
The tourism industry defines a “citywide” as a convention or event that will attract 1,000 or more out-of-town attendees, uses the Vancouver Convention Centre, and at least three downtown convention hotels.
In 2017, Vancouver welcomed 28 citywides, which brought 63,000 visitors to the city. Tourism Vancouver, the Vancouver Convention Centre and other partners work together to market, and sell, Vancouver as a meeting, convention and event destination.
The strong showing in 2018 is in part driven by an influx of nature and sustainability-themed conferences taking place at the award-winning Vancouver Convention Centre, the world’s first double LEED Platinum convention centre. Vancouver will welcome GLOBE in March (estimated 3,900 out-of-town attendees and 10,000 total), Sustainable Brands in June (estimated 2,000 out-of-town / total attendees), the American Society of Animal Science in July (estimated 4,500 out-of-town attendees and 5,000 total), the International Ornithological Congress in August (estimated 1,800 out-of-town / total attendees), and the Entomological Society of America in November (estimated 2,000 out-of-town / total attendees).
Other high-profile convention groups meeting in Vancouver in 2018 include the American Bar Association in February (estimated 4,000 out-of-town / total attendees); the TED Conference, celebrating it’s 5th anniversary in Vancouver in April (estimated 1,800 out-of-town / total attendees); and SIGGRAPH, returning to Vancouver for the third time in August (estimated 13,000 out-of-town attendees and 14,000 total).
Among the citywide events are the 2018 Canadian Tire National Skating Championships which just wrapped up in January (estimated 3,500 out-of-town attendees), HSBC Canada Sevens – World Rugby Sevens Series at BC Place in March (estimated 3,230 out-of-town attendees), and the internationally recognized BMO Vancouver Marathon in May (estimated 5,000 out-of-town attendees).
“Vancouver’s unique mix of vibrant urban culture, modern infrastructure, diverse culinary experiences and incredible natural beauty contribute to the city’s reputation as a world-class travel and meeting destination,” said Lisa Beare, Minister of Tourism, Arts and Culture. “A busy convention year is also good news for the tourism and hospitality industries. This level of success is due to the hard work and dedication of the Vancouver Convention Centre, Tourism Vancouver and partners.”
“It’s exciting to see more evidence of Vancouver’s success as a major international destination for conventions and events,” said Vancouver Mayor Gregor Robertson. “This year’s record numbers are a big win for our city’s local economy, and for all of the dedicated professionals who are working hard to put Vancouver on the industry map. We look forward to welcoming visitors from around the world to enjoy our city’s natural beauty, along with the world-class talent and meeting facilities we have to offer.”
“Vancouver’s global reputation as a place to do business, to gather, to be inspired, and to hold major events and conferences is moving from strength to strength,” said Ty Speer, President and CEO, Tourism Vancouver. “Not only has Vancouver demonstrated that we have the experience, the world-leading venues and infrastructure to execute these large, complex, and high-profile events; our city has a diverse business environment and spectacular natural setting which provide a compelling backdrop to any event.”
“We are proud of our continued success in attracting such an impressive roster of conventions and meetings to the Convention Centre and to welcome back Canada Sevens to BC Place,” said Ken Cretney, President and CEO, BC Pavilion Corporation. “Our success in competing with top cities from around the world to bring these events to Vancouver, BC speaks to the remarkable reputations of our world-class facilities, destination and hospitality and event community.”
Vancouver is currently booking conventions as far away as 2027, and beyond. To view the full list upcoming citywide conventions, visit www.tourismvancouver.com/meetings/citywide-meetings.