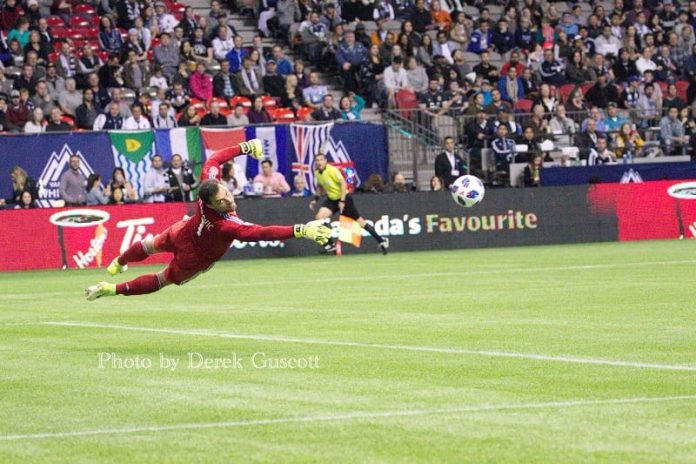 Davies, Blondell combine to seal ‘Caps win after going down to 10 men

VANCOUVER, BC: Anthony Blondell and Alphonso Davies combined on a crucial insurance goal for Vancouver Whitecaps FC just minutes after the ‘Caps were reduced to 10 men, giving the home side the 2-0 victory on Friday evening against Real Salt Lake at BC Place.

The wild win snaps Vancouver’s three-match losing streak, and sets the tone for the ‘Caps as they began a stretch of three home games in their next four fixtures. With the victory, the ‘Caps improve to a 4W-4L-1D record, after spending a week below .500 for the first time since July 2017. Real Salt Lake fell to 3W-4L-1D.

Cristian Techera put Vancouver ahead on a 75th-minute penalty kick, but was sent off on his second yellow card of the match during the goal celebration.

But just as the ‘Caps were put in danger playing on a man disadvantage, Blondell put the match away on a short right-footed stab thanks to Davies’ brilliant run along the left flank and well-timed cross.

The goal was Blondell’s first in a WFC uniform. The imposing Venezuelan striker impressed in his first home start, as he put his imprint on the match early and often by creating chances for himself and for his teammates, before being rewarded with the score to seal the win.

It was a full-team effort for Whitecaps FC, who received received contributions on the attack from Brek Shea and a gritty outing from Jordon Mutch. The English midfielder, playing his first match after missing the last three outings with a left hamstring strain, exited the context with an injury. Substitute Nicolás Mezquida came on and drew the penalty call on RSL centre back Nick Besler that gave the ‘Caps the much-needed go-ahead goal.

Stefan Marinovic recorded five saves, including a pair of acrobatic stops, for his second clean sheet of the season. The backline stood tall in the face of the RSL attack, with Kendall Waston and José Aja in the middle. Meanwhile, Sean Franklin, making his first WFC start, and Brett Levis, returning to MLS play after 18 months, were solid on each flank.

Whitecaps FC visit Minnesota United FC at TCF Bank Stadium on Saturday, May 5. Kickoff is at 11 a.m. PT live on CTV/TSN and TSN Radio 1040. They are back home on Friday, May 11 when they host Houston Dynamo at BC Place. Visit whitecapsfc.com for ticket information.

MCMILLAN ‘CAPS CORNER KICK DONATIONS
For every ‘Caps corner kick at home, McMillan donates $100 to the United Way. An additional $500 is donated for every goal scored off a corner kick. This match McMillan Corners for Kids has donated $500 for a running total of $1,800.

All photos by Derek Guscott