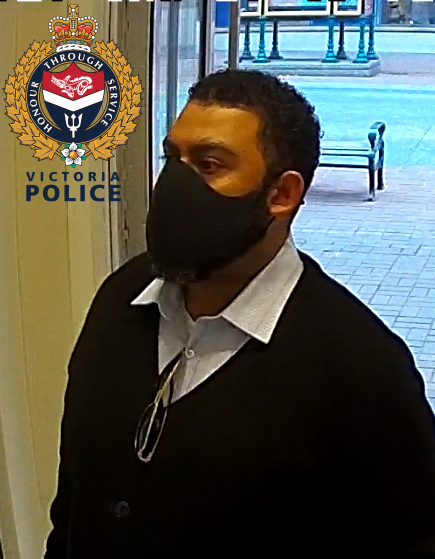 VICTORIA Police’s financial crimes investigators are asking for your help to identify a suspect in a fraud which cost a Victoria business nearly $100,000.

Investigators with the Investigation Support Unit (ISU) and Financial Crimes were called to a downtown Victoria jeweller on November 4 for a report of a substantial fraud.

Through the investigation, officers learned that on October 29 a man had attended the jeweller and selected two high-end watches for purchase. The suspect left the store and returned later with a bank draft for the purchase of the watches. While the bank draft itself was legitimate, the suspect had acquired it through a sophisticated scheme in which he fraudulently transferred funds from a customer’s account using false identification. The value of the watches was just under $100,000 and a loss for the Victoria business.

The suspect is described as a darker-skinned man with a heavy-set build. He had short dark brown hair, which was thinning at the crown, and brown eyes. A dark brown beard with grey flecks was seen sticking out from below the man’s mask.

At the time of the fraud he wore a black buttoned-up cardigan sweater, a white dress shirt open at the collar, a white t-shirt, black shoes, and he had silver aviator style sunglasses tucked into the sweater. The suspect also wore a hand or finger cast on his left hand.

The suspect was in the company of another man, who is described as taller and of a slimmer build than the first suspect. The second man was wearing dark coloured clothing. A photograph of this second suspect is below.

Investigators believe that the first suspect travelled on the BC Ferries Swartz Bay to Tswwassen sailing at 7 p.m. on October 29.

In addition to asking for your help in identifying these men, investigators are also looking to identify locations they may have travelled to, or a vehicle they may be associated with.

If you recognize these men or have information about them, call Victoria Police’s non-emergency line report desk at (250) 995-7654, ext 1. To report what you know anonymously, call Greater Victoria Crime Stoppers at 1-800-222-8477.