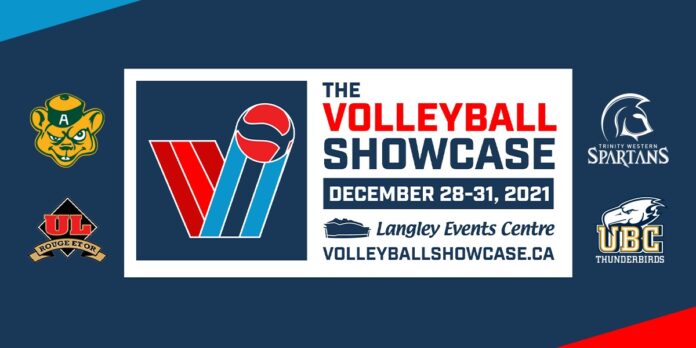 OVER the past 15 years, four universities have combined to win 13 Tantramar Trophies, which is presented to the top men’s university volleyball program in Canada, during that span, and now those four schools are set to face one another this December.

The teams – the Trinity Western Spartans, UBC Thunderbirds, Alberta Golden Bears and Laval Rouge et Or – will hit the court as part of the Volleyball Showcase at Langley Events Centre from December 28 to 31.

The event is being organized by The Elements Toronto (TET), a company which has promoted and organized events in the sports and entertainment world since 2010.

“The Volleyball Showcase was created to give all volleyball fans the opportunity to see some of Canada’s top men’s university programs and superstar players compete for mid-season bragging rights,” said Elie Shermer, the creator and founder of TET.

The Spartans, Thunderbirds and Golden Bears are familiar foes, battling amongst one another in Canada West, considered the toughest conference in U Sports men’s volleyball. Those three programs have won eight of the past nine national titles with Trinity Western accounting for five championships (2011, 2012, 2016, 2017 and 2019) while Alberta claimed the 2014 and 2015 titles and UBC winning in 2018. Laval, which competes in the RSEQ, is the only school to interrupt this run of titles, winning it all in 2013.

“We are excited to have some of the best teams from around the country to compete against and see how we measure up against them,” said TWU head coach Ben Josephson. “Anyone who has been here at this facility knows how special it is and we look forward to defending our home court.”

“We look forward to welcoming these elite teams for what should be a great four days of volleyball action this holiday season,” said Gary Ahuja, Manager of Corporate Communications and Media for Langley Events Centre.

The matches will be played on Centre Court.