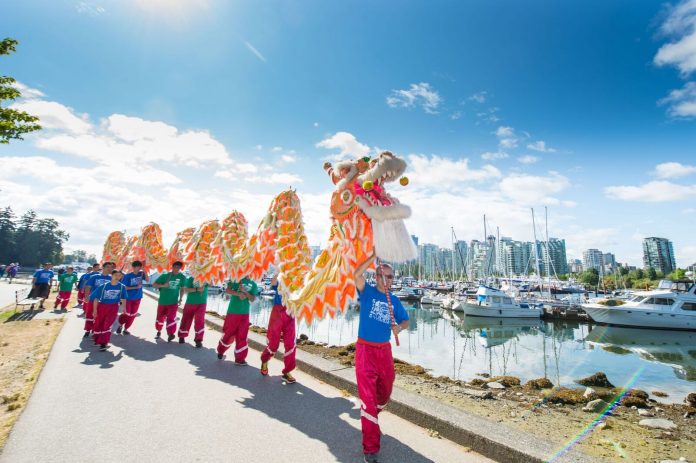 S.U.C.C.E.S.S. Foundation’s annual Walk with the Dragon was held at the Lumbermen’s Arch, Stanley Park, with over 6,000 participants and raised $400,188 for the continuance and enhancement of important social services at S.U.C.C.E.S.S. for the Metro Vancouver communities.
“The Walk is a great time to meet old and new friends. In addition to many familiar faces, we

have engaged more newcomers and refugee clients. Many of them joined the event for the first time,” said Sing Lim Yeo, Chair of S.U.C.C.E.S.S. Foundation. “The event also provides them with an opportunity to learn Canadian culture, and connect with the community.”
Led by the 100-foot S.U.C.C.E.S.S. Dragon, over 100 teams marched along the 7-km sojourn

around the seawall at Stanley Park. Music and songs then enveloped Lumbermen’s Arch to a fever pitch with giveaways and prizes at the carnival style game booths perfect for the whole family. This year, the mainstage performance welcomed a special group of performers – Kurdish Entertainment Group of refugee singers and dancers. Through music, they shared their culture with the public and expressed their

appreciation to be part of the Canadian community.
Each year, S.U.C.C.E.S.S. Walk with the Dragon garners the staunch support of elected officials from the three levels of government and prominent community leaders. Leading the group this year were Harjit Singh Sajjan, Minister of National Defense, and Jody Wilson-Raybould, Minister of Justice and Attorney

General of Canada.
“Over the past months, we have been overwhelmed by the support from the community in many creative ways to give back to the community. In addition to those long-time supporters, youth and new Chinese Canadians have also played an important role in the Walk this year,” said Chris Chan and Steven Shen, Co-Chairs of the 2017 S.U.C.C.E.S.S. Walk with the Dragon. “Our immense gratitude and appreciation to donors, sponsors, volunteers, staff and participants.“