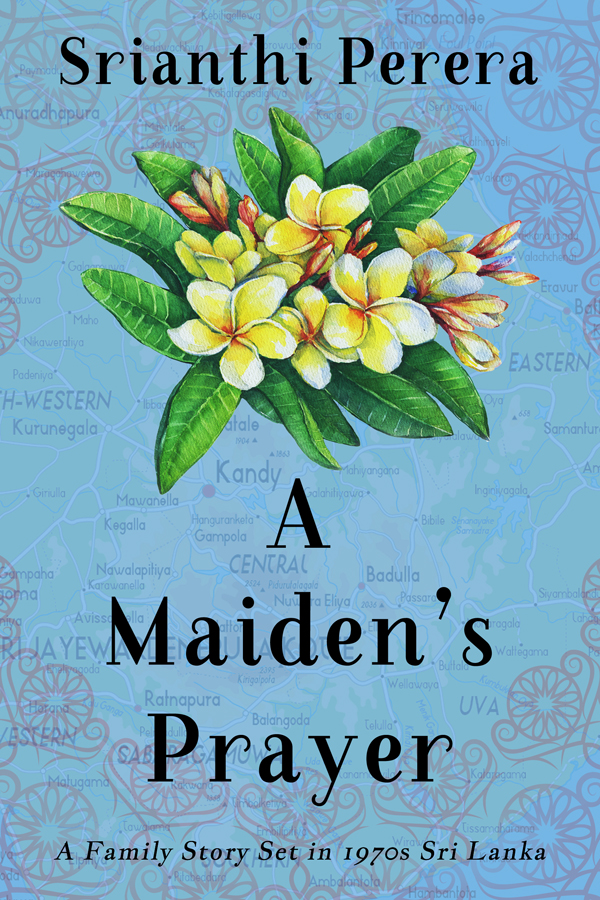 A well-written novel can transport a reader to a different time and place. When the story is written with humor and pathos—true reflections of life—the experience can be even better.

Along those lines, let me introduce the literary novel, A Maiden’s Prayer.

Set in the 1970s in the Southeast Asian tropical island of Sri Lanka, the story centers on an extended family trying to marry a male relative. Berty Rajakaruna, a Jane Austenian-type of bachelor, is trying to figure out whether marriage is worth trying to reclaim his family estate from the clutches of a scheming sister. The estate is crumbling but special because it was founded by his great-great-grandfather, who was a Mudaliyar (comparable to a country squire) under British rule.

The novel contains many themes, including:

–Sri Lankan culture: The story opens a window on a hitherto unknown culture to Western thought. Each chapter is a vignette with social, political or cultural context woven together by the thread of Berty Rajakaruna’s life.

–Astrology: It examines Sri Lankan beliefs in the power of Vedic Astrology and the role an individual’s character plays in precipitating his karma. Astrology is the basis of many arranged marriages of the day.

–Buddhism: The story is framed by Buddhist thought. More than 70 percent of Sri Lankans are Buddhists, and follow ahimsa, the non-violent principals taught in the philosophy.

–Coming-of-age: The story narrator is a 12-year-old girl who has attained age in the beginning of the book and is rebelling against the traditions she has to follow.

–Politics: The 1970s was a turbulent period in Sri Lanka’s history, with a political party that established socialist principals that resulted in food shortages and a soaring cost of living. The political environment of the day shaped the day-to-day life of this family.

Above all, A Maiden’s Prayer speaks to the universality of the human experience. This tiny island in the Indian Ocean is a world apart, but how connected are we in our needs, desires, fears and emotions?

Srianthi Perera is a Sri Lankan-Canadian journalist and former resident of Vancouver who has worked in her native Sri Lanka, the Sultanate of Oman, Canada and the United States.

She was a reporter for Arizona Republic from 2004-2015 and an assistant editor with Times Publications (community newspapers in the Phoenix, Arizona area) from 2015-2018.

She is currently a freelancer for community newspapers. This is her first novel. Her next project is a book of short travel stories.

A Maiden’s Prayer is priced at $16 for the paperback and $5 for the e-book and available at amazon.com:  https://tinyurl.com/A-Maidens-Prayer

Delta Police Board: Distinction between Council’s and Police Board’s role in municipal policing