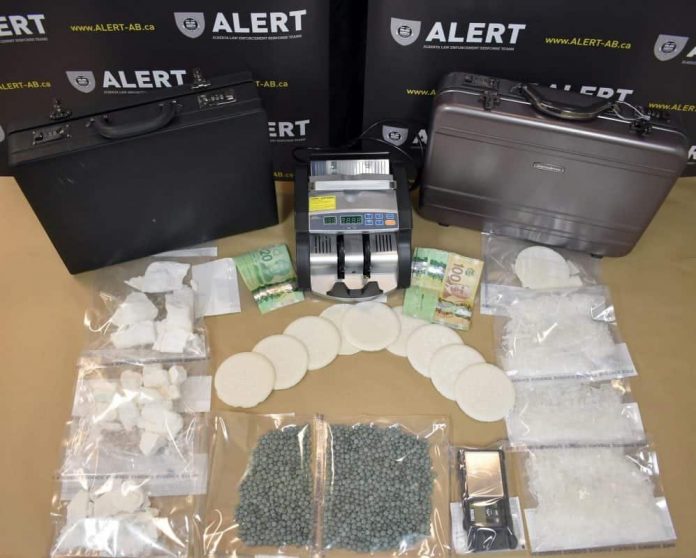 AN ALERT investigation in Grande Prairie has resulted in a significant seizure of fentanyl, cocaine and methamphetamine. Nearly a quarter million dollars’ worth of drugs were taken off the street, making this one of the city’s largest drug seizures ever.

ALERT (Alberta Law Enforcement Response Teams) Grande Prairie’s organized crime and gang team made the seizure on Friday, September 1, with the assistance of Grande Prairie RCMP. Four homes were searched with the following items being seized:

* 1.3 kilograms of powder and crack cocaine;
* 573 grams of methamphetamine;
* 1,476 fentanyl pills;
* approximately 20 grams of marijuana;
* a Mercedes-Benz SUV; and
* nearly $2,000 in cash proceeds of crime.
All told, the drugs have a street value of almost $250,000. The majority of the drugs were seized from a residence in the Riverstone neighbourhood.

This is the largest ALERT drug seizure in Grande Prairie since October 2014, when 1.8 kilograms of cocaine and more than 1,800 fentanyl pills were seized during an investigation.

“Taking a quantity of drugs such as this off the streets of Grande Prairie is a real feather in ALERT’s cap,” says Inspector Dave Dubnyk, officer in charge of regional teams with ALERT. “With the help of our partners in the RCMP, we’re doing everything we can to make Grande Prairie a safer place for families to live.”

“This operation highlights the value of ALERT and the importance of a coordinated policing response to illicit drug activity across the province,” adds Grande Prairie RCMP Superintendent Don McKenna.

The cash and vehicle will be referred to the province’s civil forfeiture office.