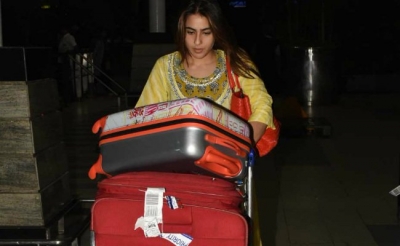 Mumbai (IANS):  When Sara Ali Khan walked out of the airport pushing her own luggage trolley loaded with three large suitcases, she disrupted the whole image of the quintessential Bollywood diva. Isn’t it only a while back, after all, that we saw another GenNow heartthrob, Alia Bhatt, sashay out of the arrival gate, even as lesser mortals fussed over her luggage?
Bollywood divas are meant to be like Alia, isn’t it — with a flunky here to hold the umbrella, and another couple to take care of luggage. With one to hold the cellphone and another to mind the make-up kit. Yet another will be at hand to give the make-up final touches before she may step out into the glare of awaiting press lenspersons — incidentally invited to queue outside the airport arrival gates by the most important person in the diva’s staff — the PR person.
That’s how it’s supposed to be with heroines, we were tempered to believe all along.
If Sara is out to break that cliche, it seem a masterstroke at a time when the heroine on screen is also growing real. It won’t be long before her next-gen rivals like Ananya Pandey and Tara Sutaria give Alia’s generation a serious run for their money in the glamour department. Sara, despite belonging to the Nawabi khaandaan of the Pataudis, has also always proudly flaunted the girl-next-door upbringing she has received from mom Amrita Singh.
The icing on the cake, however, would happen next, after Sara emerged from inside the airport. As she passed the photographers, she stopped briefly to smile and ask: “Hello! kaise ho aap” (how are you?”
Fans, young and old, on social media gushed. The media gushed. The veteran Rishi Kapoor gushed, and declared in a tweet: “Wonderful Sara. You set examples how celebrities should behave at the airport. No harm at all tugging your own baggage, no chamchas to receive — and the icing on the cake! No dark glasses or an airport look. You show confidence with no insecurities. Atta girl.”
Sara’s airport attitude would have perhaps not gone viral had it not come so close on the heels of Alia’s airport arrival.
Alia was returning to Mumbai after wrapping up the first schedule of “Sadak 2” in Ooty, Looking stylish in blue tracksuit, white shows and dark shades, Alia did smile for the paparazzi, but that was that. The business of posing for the cameras done, she gave a mandatory wave of hand, and sped off in her car.
Netizens have been gushing over both the dream girls, as expected. One particular user, however, could not help cry out loud on world wide web: “Sara is better than Alia,”
We don’t know if the person was talking of airport arrival attitude, or expressing sheer infatuation.