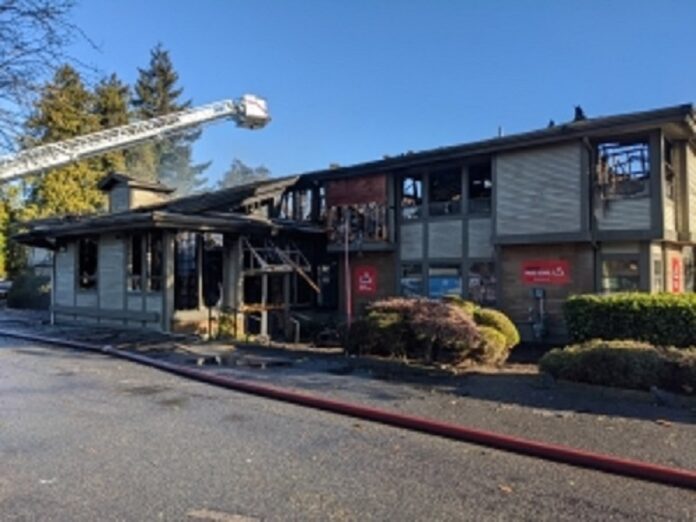 A suspect has been charged in relation to the January 1, 2020 fire of a professional building on 12th Avenue in Tsawwassen in Delta. The building housed two dental clinics and a music school.

The Delta Fire Department was called to the location at approximately 4 a.m. on January 1. The fire was extensive, and could not be fully extinguished until the next day. Fortunately, there were no injuries in relation to the incident.

Daniel Robert Hacking, 30, of Delta has been charged with one count of break and enter in relation to the incident and one count of arson damaging property.

“This was a challenging investigation, as the building was completely destroyed in the fire,” said Staff-Sgt. Dave Vaughan-Smith of Delta Police’s Investigations Bureau. “I commend our Delta fire fighters – they definitely had some demanding work with this fire, and were of great assistance in our investigation.”

“We want to acknowledge the impact this fire had on our community, as we know many were understandably upset. Three separate businesses were badly damaged by the fire, with a broader impact on their customers and clients,” he added. “It was important to our officers to take the time to do a thorough investigation.”

Hacking has been released on a number of conditions, one of which is being under house arrest, 24 hours a day, unless receiving written permission to leave for compelling reasons, such as employment, or outings under supervision. He is also not permitted to possess any incendiary devices.

Hacking’s next court appearance is August 7.