A proclamation declaring July 1, 2022, as “Sant Teja Singh Day” by Attorney General David Eby and the Lieutenant Governor Janet Austin was presented by Rachna Singh to the members of the Sikh community at the Guru Nanak Sikh Gurdwara.

The proclamation describes Singh as “a humanitarian, scholar and tireless advocate for Sikhs in Canada who dedicated his life to challenging inequality, fighting for a just society and serving without discrimination in accordance with the tenets of Sikhism”. 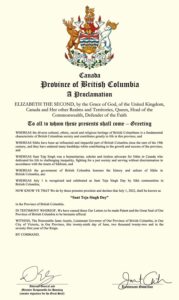 Sant Teja Singh was a pioneer for the Sikhs and immigrants who call Canada home today. They stood against the government at times when the Sikhs and other minority groups were oppressed. The remarkable achievements of Sant Teja Singh paved the way for Sikhs and people of Indian descent to live and work in this country.

Some of the accomplishments include establishing the first gurdwara in Canada, the U.S. and the U.K., the establishment of the Khalsa Diwan Society in Vancouver, and creating the Guru Nanak Mining and Trust Company. These accomplishments allowed Sikhs to get a strong foothold in Canada and continue to work hard to achieve success in this country.

Sant Teja Singh was a towering spiritual leader of the Sikh community who had fought for the equal rights to the immigrants, especially those who began coming to BC from India. Those who came to Canada had to endure blatant racism as they were not allowed to bring in their families, and they didn’t have the right to vote.

The authorities who wanted to keep Canada as a “white man’s land” adopted several policies that were aimed at discouraging permanent settlement of Indian immigrants in BC. The government created a plan to relocate Indian immigrants to Honduras. Sant Teja Singh who came to know about such plans, stood against the government and helped the immigrants establish themselves in British Columbia.