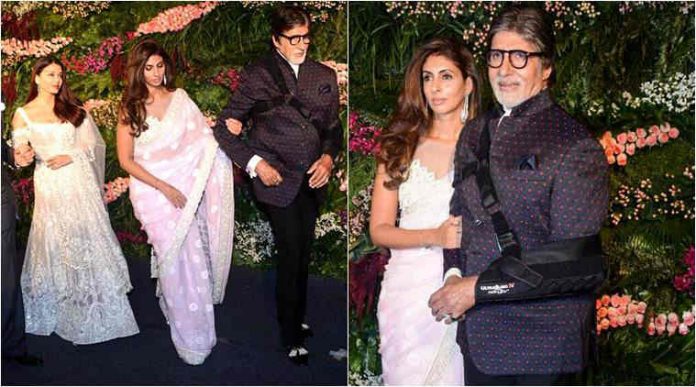 Mumbai (PTI): Megastar Amitabh Bachchan says he is experiencing “unbearable pain” as an old shoulder injury has flared up again.

The 75-year-old actor took to his personal blog, where he said that the injury recently got aggravated after some heavy-lifting on a film’s sets.

Bachchan is currently under medication and applying ice compresses to his injury.

“… Old injury to the left shoulder has through time and activity and age been giving nagging pain… That has recently got aggravated due some strong usage on set… and though the pain became unbearable, the medication and the Tunnel visit has shown that it is an extra tear on the rotor cup, but that it is not reached an alarming stage,” he wrote.

The actor, who will next be seen in “Thugs of Hindostan” and “102 Not Out”, also shared some pictures from actor Anushka Sharma and Indian cricket captain Virat Kohli reception last night.

Bachchan sported a black sling as he attended the high- profile event and was joined by daughter Shweta Bachchan Nanda, actors son and daughter-in-law, Abhishek Bachchan and Aishwarya Rai Bachchan.

“So arrive in a somewhat state that could give undue attention to the issue… But really it is not as bad as it looks…,” Bachchan said about his look.