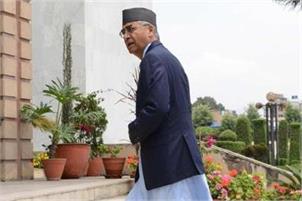 Kathmandu (PTI): Sher Bahadur Deuba, a veteran politician known for his close ties with India, was on Tuesday overwhelmingly elected the prime minister of Nepal for the fourth time, taking over the reigns of the country at a time the Himalayan nation navigates through a political turmoil.

Deuba, the president of Nepal’s oldest party, the Nepali Congress, was elected the 40th prime minister of the country’s young democracy, following a voting in the parliament, during which he secured 388 votes out of a total of 558 votes cast.

He was the only contender in the election.

Deuba is likely to form a small Cabinet tomorrow which will be expanded in a few days and some of the Madhesi parties are also likely to join the coalition.

He takes over at a crucial time in the politics of Nepal, which is holding the first local-level polls in 20 years, but one that is being resisted by Madhesi people. The inhabitants of the southern Terai region who share cultural ties with Indians have been demanding more political representation.

Deuba, who was awarded an honorary doctorate degree from New Delhi’s Jawaharlal Nehru University in 2016, is said to enjoy the confidence of prominent Indian leaders, and that could potentially aid him in arresting the growing disenchantment among the Madhesi community.

He played a key role in amending Nepal’s new Constitution promulgated in September 2015 to address the demands of Madhes-based political parties. Deuba also played a key role in bringing the parties on board for the second phase of local-level elections, now scheduled for June 28.

Deuba, who has been elected to the parliament from far- western Dadeldhura district, has promised to amend the new Constitution to fulfil the demands of the Madhesi people.

During Deuba’s previous term as prime minister in 1996, Nepal and India signed the historic Mahakali Treaty for shared utilisation of the waters of the river by the same name.

Nepal’s then king Gyanendra Shah took power through a coup detat in October 2002 and removed Deuba from the post.

But he had to restore him in 2004 after weeks of street protests. Deuba was again removed from power by the king in 2005, when he was also imprisoned on charges of corruption.

Addressing the parliament before the voting today, Deuba said he would accord priority to complete the local polls and conduct provincial and parliamentary elections by March next year.

He said he would also prioritise the amendment of the Constitution to address the demands of Madhesi people. “My other priorities will be economic reforms and rapid development of the country and for that I would focus on developing infrastructure such as electricity, transportation and irrigation,” he said.