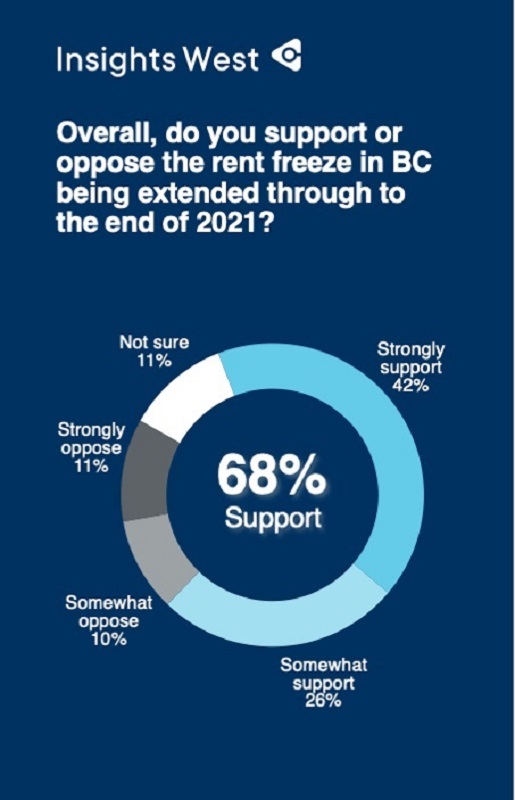 FOLLOWING the announcement last week by the BC NPD government of a proposed extension of rent controls until the end of 2021, a new Insights West survey shows significant overall support for this initiative among the general public.

Results show a division between renters and landowners and landlords on this public policy, and indicate that restrictions are playing a role in limiting the supply of rental units in the province.

The general public supports the rent freeze being extended until the end of 2021, but results are not as one-sided among property owners and landlords. Overall, the majority of BC residents (68%) support the freeze, with 42% who ‘strongly support’ and 26% who ‘somewhat support’ this public policy initiative. Opposition is fairly minimal (21%), and the final 11% have no opinion.

Not surprisingly, renters in this province (which accounts for 32% of adults in BC) are nearly universally in favour of this initiative, with 93% in support (70% ‘strongly’, and 23% ‘somewhat’). For existing landlords, results are evenly divided between those who support this idea (47%) and those who are opposed (47%), while homeowners are slightly more in favour (55% support and 32% opposed).

Financial hardship brought on by the pandemic is a major factor in this high level of support. While 60% of renters have indicated that they have had no difficulty throughout the pandemic in paying their rent, a sizeable minority (40%) are on the opposite side of the spectrum and have had either ‘a lot of difficulty’ (11%) or ‘some difficulty’ (29%) during this time period. A strong majority of residents throughout the province (77%) agree that ‘the extension of the rent freeze is needed to help renters who have been hit hard by the pandemic’, and 70% agree that ‘rental rates are too high in BC to begin with, so it makes sense for there to be a rent freeze’.

Many in the province also agree that ‘rent controls will have a negative effect on the supply of housing in BC’ (37% agree, 44% disagree and 19% have no opinion); agreement with this statement increases to 66% of landlords in BC. There is public sympathy for landlords as well as it pertains to bearing the cost of this freeze, as 63% agree that ‘landlords shouldn’t have to bear all the cost of the pandemic, renters need to pay too’. Agreement with this statement increases to 76% among landlords surveyed compared to only 41% agreement among renters.

Similarly, many residents (55%) agree that ‘house prices and costs like property taxes are going up, renters need to pay their fair share even during the pandemic’. Landlords are far more likely to agree with this sentiment (77%) compared to renters (33%).

Public policy initiatives like rent controls and freezes are having an impact on the supply of housing in BC according to the poll, which has uncovered a significant number of homeowners who are unwilling to rent their property. The results show that 12% of adults in BC count themselves as a landlord in the province, but a further 9% own a property that is suitable for renting but that is not being rented out.

The primary reason chosen for not renting out their property is that it is too much hassle/not worth it (47%), and a significant number (28%) specifically attribute their hesitation to rent controls and rent freezes. Concerns about COVID-19 are also a significant factor (37%), as is the fact that the property is occasionally being used by themselves/family/friend members (37%).

“The surprising finding in our poll was the amount of rental inventory in our province that goes unused due to pandemic concerns as well as rent control policies. While everyone agrees that rent freezes are good for renters, many agree that this policy will likely have a negative effect on the number of rental units available,” says Steve Mossop, President, Insights West.