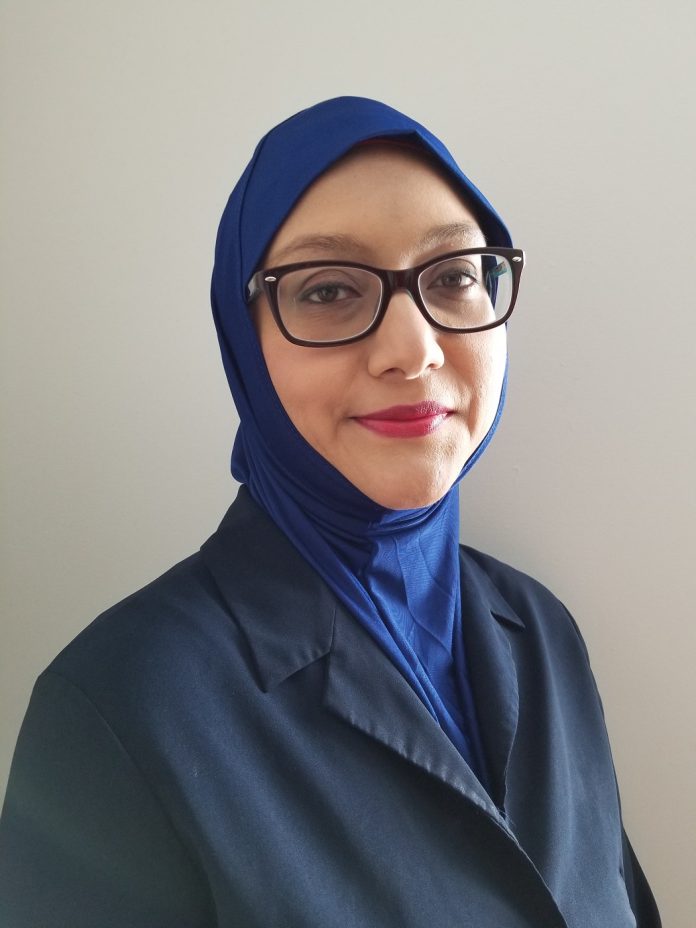 SOCIETY defines Bibi Firdos Dilmahomed as a woman, a professional, an immigrant and a Muslim. She is much more than these labels.

Dilmahomed came to Canada in 2008 to study at university and to build a life. Originally from Mauritius Island, which is the most diverse society Dilmahomed had known until she came to Canada, Dilmahomed embraced the Canadian culture with ease.

She found it easy to reconcile different aspects of her life – cuisine, relationships, faith – with her new home, except for one: being treated differently because she looks different. In effect, Dilmahomed wears a hijab, commonly known as a veil, which is a piece of cloth that she uses to cover her hair and show her adherence to the Islamic faith.

Campus was a safe place. Being out and about in the community was a different story. Dilmahomed was often yelled at and called names in the street, at the mall and in stores. Dilmahomed had her share of, “Go back to your country” and being called “terrorist.” Strangers would start conversations only to tell her how “terrorists are killing our troops” or wishing her Merry Christmas and asking her if she knew who “won” the crusades. Dilmahomed was made to feel responsible for the actions of others in history and in present day. To her dismay, these came from people of different ages and ethnic groups. It even occurred on middle school premises.

Dilmahomed finished her studies and started work in a non-profit organization in 2012. She was invited to speak at a local Business and Professional Women’s Chapter on her experience as a professional Muslim woman. Dilmahomed was apprehensive as she did not know how her speech would be received. It was a life-changing experience: she understood what it meant to become empowered to speak one’s truth.

“People needed to hear the truth,” says Dilmahomed. “Racism and Islamophobia are ugly truths. People fear who and what they do not know so they react accordingly.”

Since that event, Dilmahomed has been asked quite often to speak at different events on various issues. These include discussions on combatting stereotypes and Islamophobia, creating awareness of Islamic practices, interfaith dialogues, refugee resettlement and what the terms of inclusion and diversity mean in a community. Dilmahomed has served as a panelist at the local university, a presenter at the local rotary, a contributor at interfaith dialogue events and as a promoter to the Open Mosque Day in B.C.

Dilmahomed is not a social activist. She is not on a mission. Dilmahomed is passionate about diversity, building bridges, challenging stereotypes, engaging in meaningful conversations and promoting inclusivity. Dilmahomed feels she is responsible to speak the truth and to work with others to create a safer, more welcoming community. She believes racism and Islamophobia make an unsafe community for all.

Dilmahomed does not impose her faith on others. She states that accepting others does not mean she embraces their beliefs but rather gives them the space to believe in who they choose. Dilmahomed understands people do not read the Qur’an, the Islamic holy book. People read her.

She has made it her duty to be the best version of herself. Dilmahomed said her faith teaches her that a person is distinguished over another not by race but, rather, the quality of one’s character and conduct. Dilmahomed feels that all faiths promote goodness and that people have more things in common than they think.

In her speeches, Dilmahomed emphasizes universal values of respect, compassion, empathy, integrity and justice for all. In her conduct, she practices the Islamic values of devotion, service, peace and love.

Motivated by a need to educate people about each other, Dilmahomed always invites youth to join interfaith initiatives because “they are the leaders of tomorrow and they must learn and accept each other.” She strongly believes more should be done in schools to promote inclusivity and fight against racism.

Dilmahomed suggests, “If we start at the grassroots and sustain the effort, we would see greater results.” She applauds the middle school whose principal invited her to contribute to its initiative on educating students on Ramadan, the Islamic month of fasting.

As a final thought, Dilmahomed asks, “How does it feel to be the poster child of the fight against racism / Islamophobia?” Her answer is always, “If not I, who?” She believes her words inspire action and make a difference.

Claims of Islamophobia and discrimination inside CSIS “deeply disturbing”: NCCM