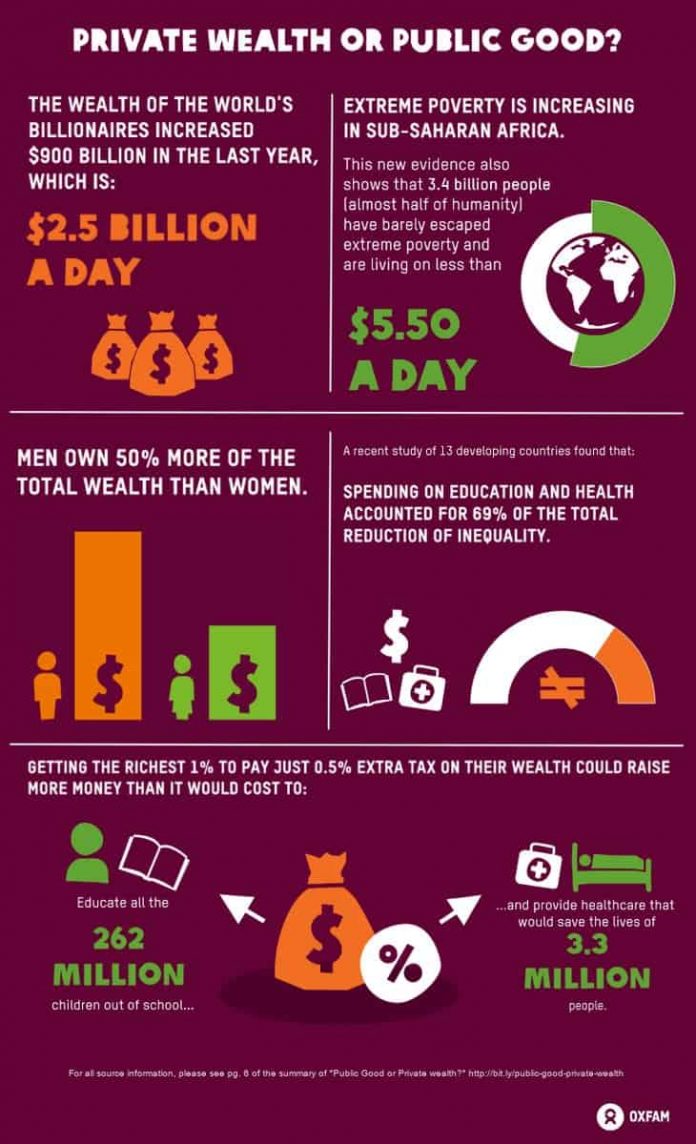 ‘Public Good or Private Wealth’ shows the growing gap between rich and poor is undermining the fight against poverty, damaging our economies and fuelling public anger across the globe.  It reveals how governments are exacerbating inequality by underfunding public services, such as healthcare and education, on the one hand, while under taxing corporations and the wealthy, and failing to clamp down on tax dodging, on the other.  It also finds that women and girls are hardest hit by rising economic inequality.

The report also highlighted the contrast between the rich and the poor. For example, it pointed out:

* Mukesh Ambani ranks 19th in the Forbes 2018 billionaire list and is the richest Indian. His residence in Mumbai, a towering 570-foot building, is worth $1bn and is the most expensive private house in the world.
* Pratima, who lives in a slum in Patna, eastern India, lost both her twins due to delays and scarce resources in her nearest clinic. Poor women like Pratima have to give birth without proper maternal healthcare, leaving them vulnerable to complications, neglect and stillbirth as a result.

Winnie Byanyima, Executive Director of Oxfam International, said: “The size of your bank account should not dictate how many years your children spend in school, or how long you live – yet this is the reality in too many countries across the globe. While corporations and the super-rich enjoy low tax bills, millions of girls are denied a decent education and women are dying for lack of maternity care.”

The report reveals that the number of billionaires has almost doubled since the financial crisis, with a new billionaire created every two days between 2017 and 2018, yet wealthy individuals and corporations are paying lower rates of tax than they have in decades.

At the same time, public services are suffering from chronic underfunding or being outsourced to private companies that exclude the poorest people.  In many countries a decent education or quality healthcare has become a luxury only the rich can afford. Every day 10,000 people die because they lack access to affordable healthcare. In developing countries, a child from a poor family is twice as likely to die before the age of five than a child from a rich family. In countries like Kenya a child from a rich family will spend twice as long in education as one from a poor family.

Cutting taxes on wealth predominantly benefits men who own 50 percent more wealth than women globally, and control over 86 percent of corporations.  Conversely, when public services are neglected poor women and girls suffer most. Girls are pulled out of school first when the money isn’t available to pay fees, and women clock up hours of unpaid work looking after sick relatives when healthcare systems fail. Oxfam estimates that if all the unpaid care work carried out by women across the globe was done by a single company it would have an annual turnover of $10 trillion – 43 times that of Apple, the world’s biggest company.

“People across the globe are angry and frustrated.  Governments must now deliver real change by ensuring corporations and wealthy individuals pay their fair share of tax and investing this money in free healthcare and education that meets the needs of everyone – including women and girls whose needs are so often overlooked. Governments can build a brighter future for everyone – not just a privileged few,” added Byanyima.