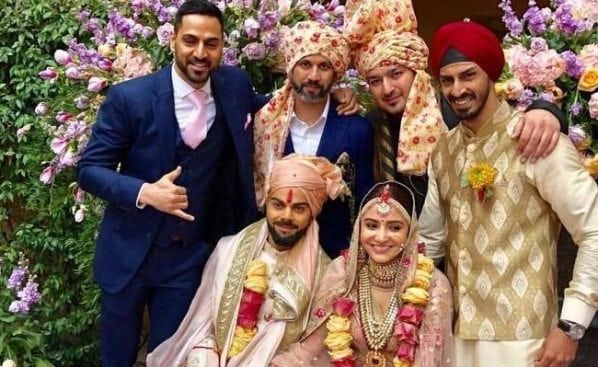 Anushka and Virat ended days of suspense and media speculation about their wedding plans by getting married in a private ceremony. It was attended by close family members and friends, at a resort in Tuscany, Italy.

“Anushka and Virat, love and wishes for this auspicious day… Togetherness always!” he tweeted.

It was in Shah Rukh’s “Rab Ne Bana Di Jodi” that Anushka made her Bollywood debut. The film released exactly on this date (December 12), in 2008.

Cricketer Sachin Tendulkar wrote, “Congratulations and best wishes to the just married Virat and Anushka. You both look wonderful together.”

Tennis player Sania Mirza also tweeted, “Congratulations you two. You look lovely and so so happy. Wish you all the happiness in the world.”

“Today we have promised each other to be bound in love forever. We are truly blessed to share the news with you,” Sharma and Kohli said on Twitter, posting pictures of the wedding ceremony.

The bride looked resplendent in a pink Sabyasachi wedding lehenga, while the groom looked dapper in a colour-coordinated sherwani from the same designer.

“This beautiful day will be made more special with the love and support of our family of fans and well wishers. Thank you for being such an important part of our journey,” they said in identical tweets.

Filmmaker Karan Johar, who directed Sharma in his last venture “Ae Dil Hai Mushkil” tweeted, “Huge congratulations and tons of love to Anushka and Virat. Beautiful couple and I wish them and their loved ones the best years ahead.”

Actor Shahid Kapoor, who worked with Sharma in “Badmaash Company”, tweeted, “So wonderful. Many congratulations to both the families.”

Priyanka Chopra tweeted, “Big Congratulations to Anushka and Virat! Your union is what fairy tales are made of. Wish you both every happiness that you ever wanted. Much love always!”

Sonam Kapoor wrote, “Congratulations! You guys make an amazingly beautiful couple!” While Riteish Deshmukh quipped, “From now onwards Virat will happily be the vice captain at home. Hail the new captain Anushka. Once again wish you a happy married life.”

Among the younger stars, wishes to Anushka and Virat came from several actors including Varun Dhawan, Alia Bhatt and Sidharth Malhotra.

Varun, who will soon start working with Anushka on “Sui Dhaaga”, tweeted, “Congratulations Virat and Anushka. Wish you all the happiness on your beautiful journey together.”

Alia said, “Congratulations Anushka and Virat! Wishing you all the love and happiness in the world!”

“Many many congratulations Virat and Anushka. You both looked so happy and radiant. Hope that is what the rest of your life together looks like, now and always! Lots of love,” Sonakshi Sinha tweeted.

Arjun Kapoor said, “Rab ne bana di Jodi! The line that holds importance in your personal and professional life! So happy for Anushka and Virat. Genuinely two of the nicest people I know fully deserving of this happiness today and forever.”

Huma Qureshi tweeted, “So happy for you both !! Wishing you a lifetime of joy togetherness love Virat and Anushka.

Actor Abhishek Bachchan said, “Many congratulations to Anushka and Virat on their wedding. God bless and welcome to the club!”

Athiya Shetty tweeted, “This is so beautiful.

Congratulations Anushka and Virat. Wishing you both endless happiness, laughter, and love!”

Anushka and Virat, who were married with Hindu wedding rituals, will host a reception in New Delhi on December 21 followed by another bash in Mumbai for their industry friends and cricketers on December 26.

The celebrity couple, who had been dating for four years, were tight-lipped about their wedding plans despite the hype in the media.

In October, a newspaper reported that an Italian wedding may be on the cards for the couple.

The rumours intensified after Kohli was rested for the remaining ODI series against Sri Lanka.

Sharma and Kohli, both 29, first met on the sets of a commercial.

In a statement by Sharma’s representative, the couple said they will shift to their new residence in Worli, Mumbai later this month.

After the reception, the couple will fly to South Africa where Kohli will be prepping for the upcoming series.

The actor will spend the New Year’s Eve with her husband before flying back to Mumbai to start the shooting of Aanand L Rai’s film with Shah Rukh Khan.