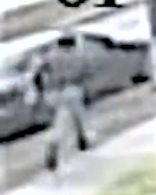 BURNABY RCMP are seeking additional witnesses as investigators look to locate a suspect after a pedestrian was pushed and injured on Monday, January 23.

A 29-year-old woman was walking on the sidewalk westbound along Edmonds Street, just before Griffiths Drive, shortly before noon, when a man jogging towards her briefly stopped in front of her. The man did not say anything to the victim, but allegedly pushed her with both hands, causing her to fall to the ground.

The victim broke her arm in the fall, but the suspect continued jogging eastbound without stopping to help.

“Several witnesses have already spoken to police, but we would like anyone else who witnessed this incident or who may have seen the suspect before or after the incident contact Burnaby RCMP,” said Cpl. Mike Kalanj. “In addition, we would like to urge the suspect to come forward and speak with police.”

The suspect was captured on a nearby surveillance camera after the incident.