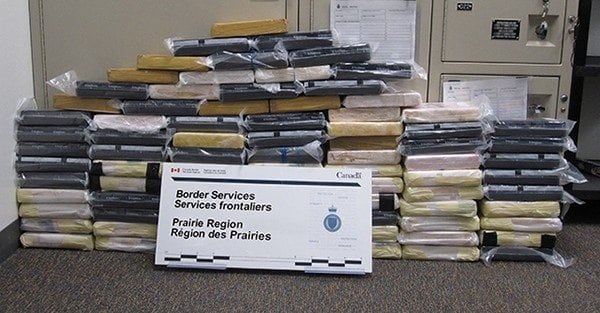 THE Canada Border Services Agency (CBSA) and the RCMP on Friday announced a record suspected cocaine seizure at the Coutts, Alberta border crossing.

On December 2, CBSA officers at Coutts intercepted a commercial vehicle hauling produce from California that was destined for an Alberta business. While examining the cab of the vehicle, officers found 84 bricks of suspected cocaine with a total weight of 99.5 kilograms. This is the largest suspected cocaine seizure recorded by CBSA officers in Alberta to date.

According to police, this seizure could be worth between $6.7 to $8.4-million or more if sold at the gram level.

Two travellers, the driver and a passenger, were arrested

and turned over to the RCMP. On December 4, the RCMP charged Gurminder Singh Toor, 31, of California and Kirandeep Kaur Toor, 26, of California on four counts each under the Controlled Drugs and Substances Act.

Kim R. Scoville, Regional Director General, Prairie Region, CBSA, said: “Had this quantity of illicit narcotics made its way into our communities undetected, the impact could have been devastating.”

Inspector K.C.A. (Allan) Lai, Operations Officer, RCMP Federal Policing South, Calgary, added: “The success of this investigation is proof that collaboration and intelligence sharing with our law enforcement partners goes a long way in reducing criminal activity in our communities and keeping Albertans and Canadians safe.”

Prior to this incident, the largest CBSA cocaine seizure in Alberta was 92.74 kg, also intercepted at Coutts, on October 10, 2016.

Cocaine is the second-most prevalent street drug in Canada.