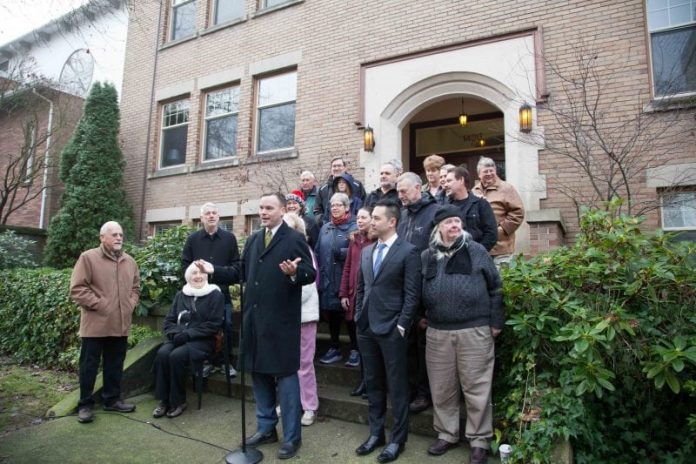 THE Government of British Columbia is beefing up protection for renters by closing a loophole that some landlords used to seek inflated and unfair increases in hot rental markets.

On behalf of Municipal Affairs and Housing Minister Selina Robinson, Vancouver-West End MLA Spencer Chandra Herbert announced on Saturday that the government is eliminating the geographic rent increase clause in the Residential Tenancy Regulation and in the Manufactured Home Park Tenancy Regulation.

“Renters have been threatened with huge rent hikes under the existing rules — that’s a scary situation for any renter,” said Chandra Herbert. “Since 2008, I’ve been working to stop this, so that renters can have the more secure housing they need. I’m pleased our government has delivered for renters today.”

“My neighbours and I were threatened with huge rent increases — up to 73% for some of us,” said tenant Ross Waring. “No one should have to face that.”

Eliminating the loophole means that landlords will no longer be able to use this clause to seek large rent increases above the allowable rent increase limit when other units in the area rent for higher amounts.

“With near zero vacancy rates in many B.C. communities, too many tenants live in fear of drastic increases to their rent,” said Robinson of the amendments. “This change means an end to one more loophole that some landlords have taken advantage of, and builds on the other steps our government has taken to increase protections for renters, such as closing the fixed-term lease loophole and increasing resources for the Residential Tenancy Branch.”

* In September, the B.C. government added $6.8 million in new funding for the Residential Tenancy Branch to reduce wait times for tenancy disputes and to establish a new compliance unit to take action against landlords and tenants who are repeat or serious offenders.
* In October, the Province closed a major loophole in fixed-term leases to improve the rights of renters throughout British Columbia.
* The Province also launched a new online application to make it easier and faster for tenants and landlords to apply for dispute resolution.
* The Residential Tenancy Branch promotes successful tenancies by providing tenants and landlords with information on their rights and responsibilities.
* Each year, the branch receives between 20,000 and 22,000 applications for dispute resolution.