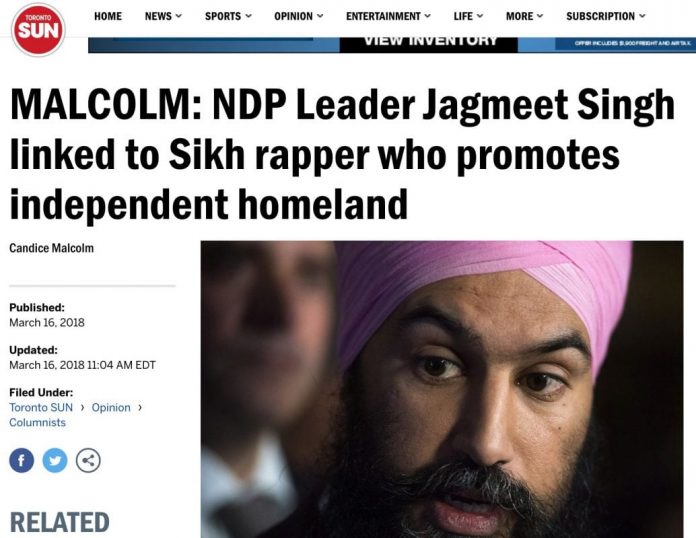 In the article published on 16 March 2018, which, the SPA says has still has not been amended by the Toronto Sun, Candice Malcolm wrote: ‘A Shaheed is an Islamic or Sikh martyr who died fulfilling a religious commandment and is promised a place in paradise.’

This article came at the height of a right-wing-driven media frenzy in Canada which exploited Canadian Prime Minister Justin Trudeau’s visit to India to unleash a barrage of allegations of so-called Canadian Sikh extremism, points out the SPA.

In response to Malcolm’s article, the Sikh Press Association submitted a complaint to the NNC. The complaint explained that the concept of ‘paradise’ as a reward for martyrdom did not exist in the Sikh tradition, in contrast to Abrahamic faiths, which include Islam. The complaint said that Malcolm’s statement ‘borders on prejudice’ because of her assumption that Shaheed refers to the same thing for both Sikhs and Muslims.

Dr Jasjit Singh is a research fellow at the University of Leeds who has conducted research into so-called Sikh ‘radicalisation’ in the UK. Sikh PA recommended his research, which included an explanation of the concept of shaheed, to the Toronto Sun and the NNC.

Speaking of the NNC decision, Dr Jasjit Singh said, “This decision highlights the need for journalists and those commenting on Sikh issues to undertake a sufficient level of research when discussing Sikh concepts. I am pleased my research on Sikh narratives and issues has provided clarity on the use of the term shaheed in a Sikh context.”

Jasveer Singh, Sikh Press Association senior press officer, said in response to the NNC’s finding: “It is great to see the NNC recognise this inaccuracy in the Toronto Sun. It took more than a month for this decision to come about, involving lots of dialogue between all involved. We now hope Candice Malcolm and the Toronto Sun will publicly apologize for misportraying what it means to be a Sikh shaheed. Sikhs are more than capable of defining our own concepts. This finding confirms that it is dangerous when others do so for the purpose of lumping Sikhs with Jihadis to further their own scaremongering narratives.

“Revering our shaheeds is a big part of the Sikh faith. However, they are not revered for doing something to get into ‘paradise’. They are revered for standing up to injustice and fighting oppression, and giving their lives to do so. The Sikh Press Association thank all of our supporters in Canada for helping us to tackle media misrepresentation of our community. We will continue to do all we can to grow and become established in Canada and North America as a whole.”

Now that the NNC has ruled on this, the SPA expects the Toronto Sun to publish a fair report of its decision, which can be found in full here.