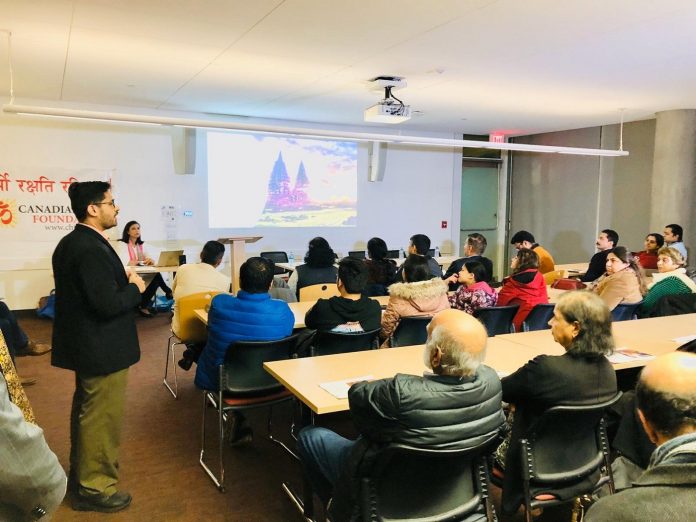 THE Canadian Hindu Foundation recently organized a meeting and brought together intellectuals from different walks of life to discuss and find ways for the well-being of Hindu Canadians and Hindus living abroad. Canadian Hindu Foundation is a well-known group whose mission is to unite Hindus and help needy people from all sections of the society with guiding principles and values driven by the core Hindu spirit of “Vasudhaiva Kutumbakam”, (meaning the entire world is one family). The organizers said the event was focused on bringing to light the atrocities faced by Hindu minorities in various countries abroad.

The event kicked off with chanting the mantra for peace and vitality for everyone followed by a brief presentation.

Key points highlighted by the organizers:

1. Statistics about global distribution of population based on the religion they practice. Hinduism is practiced by approximately 1.1 billion (15% of world’s population) individuals cross the world amongst which only 33 million live outside of Hindu majority countries India and Nepal.

2. Hinduism is one of the oldest surviving major faith in the world and 3rd largest tradition in the world.

3. Canadian core values of respecting human rights and non- discrimination are the foundation of the Hindu religion which has survived many centuries even after having suffered multiple religious conquests and mass invasions.

4. Currently, Hindu minorities residing in countries such as Pakistan are being prosecuted and forcefully converted or face the dire consequences such as Hindu women being raped and killed.  Hindu families are being deprived of basic humane living conditions leading to serious human rights violation.

6. Lack of understanding and official data has led to ignorance of these violations and apathy against Hindu minorities while there are many oral accounts of survivors that speak of this horror.

The event was managed by Aradhna Sharma and Raghavendra.

After the presentation, during the Q&A session, what action was required to deal with this situation was discussed with a panel of five humanitarians, including renowned author Jeffery Armstrong, Siddhartha Chaudhary, Ajay Garg, and Priti and Ravi Upadhyay. Panelists answered many questions touching on concepts such as true meaning of “Santana Dharma” which is related to working for the greater good of everyone; and “transgenerational trauma” that embodies into the DNA of humans and the risks of the same in youth as Hindus being the second youngest population in the world. Hinduism being tolerant faith made it vulnerable to extinction and reasons leading to decreasing Hindu population in Hindu majority nations.

There were discussions about Canada being a champion of human rights, having taken necessary actions many times to lead the world to a safer place by welcoming persecuted minorities. Many Afghan Sikh families have already taken refuge in Canada, which is a welcome step, and similarly, barriers should be removed for Hindu minorities seeking refuge in Canada, it was suggested.