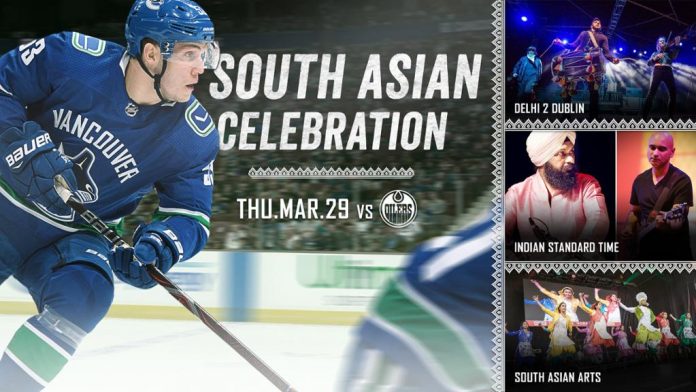 The night will feature contributions of Canadian South Asians to hockey and hockey culture in BC. The NHL careers and impact of two prominent individuals of Indian descent – Manny Malhotra and Robin Bawa – will be told throughout the night. Bawa will be on hand for a ceremonial puck drop to kick off the night’s festivities.

Hockey Night in Canada in Punjabi’s broadcasters will join Canucks host Hannah Bernard in-bowl and be featured in content videos over the course of the night. Live musical performances will also be featured, including Indian Standard Time (Canadian anthem), Dehli 2 Dublin (pre-game and intermission) and South Asian Arts Society bhangra dancers and drummers (in game and intermission). Vancouver legend Vikram Vij will take part in a “What’s cooking?” segment, delving in to the delectable Indian cuisine options available at the game.

Prior to the game, fans are encouraged to head to the Toyota Plaza for pre-game festivities, featuring a dance performance by the South Asian Arts Society as well as bhangra music performed by DJ Jovan Heer.

South Asian Arts was co-founded by Gurpreet Sian and Raakhi Sinha in 2005 with an aim to balance the lives of children and adults and develop their individuality through the arts, creating a passion for life. Since then, they have been active in promoting South Asian dance, music, and culture via dance and music classes, professional performances and workshops, guest lectures, as well as children’s cultural summer camps. They have travelled across British Columbia and taught over 30,000 students in both elementary and secondary schools.

Founded by Tarun Nayar (of Beats Without Borders cred), Sanjay Seran (at the time hailing from live bhangra act Signia), and Ravi Binning (a professionally trained bhangra dancer and dhol player), it was obvious D2D had something people wanted. Word spread about their ridiculously energetic live show, and these road-warriors have been touring constantly since 2006: mesmerizing crowds at many of the top festivals across Canada and the US, blowing people away in the UK, Australia, Germany and Malaysia as well as performing to awe-filled audiences in Hong Kong, Taiwan and Dubai.

What would happen if Bob Marley had explored progressive rock in Delhi? The answer may be found closer to home in Surrey BC: Indian Standard Time!