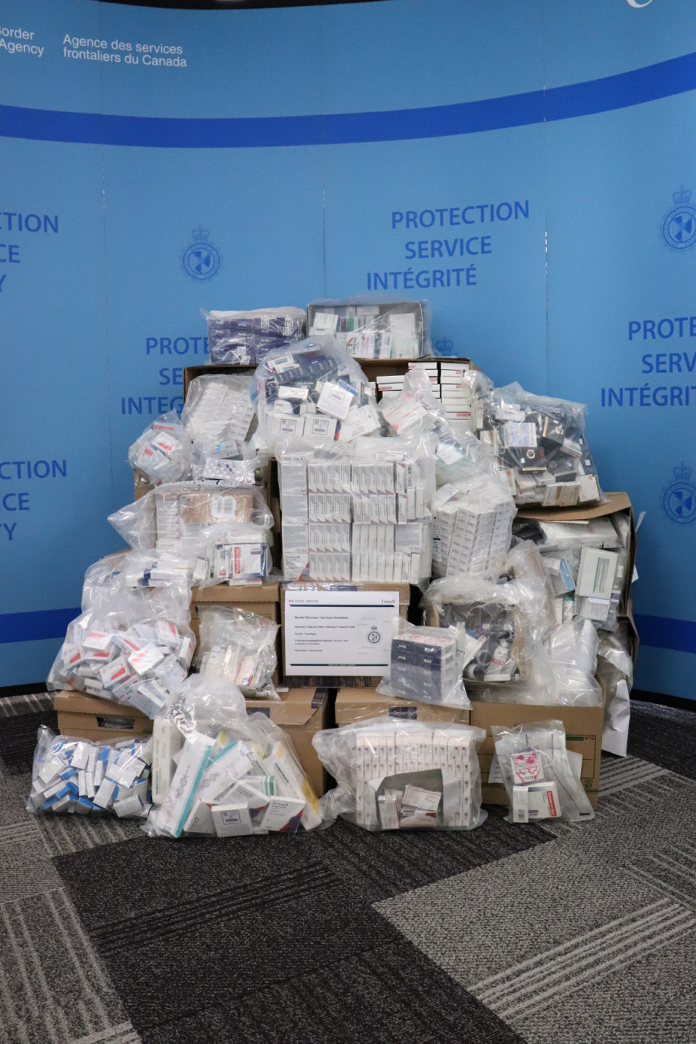 THE Canada Border Services Agency (CBSA) on Wednesday announced that following its lengthy investigation called Project Trajectory, four individuals have pleaded guilty in Vancouver Provincial Court and received sentences for their roles in a steroid smuggling and distribution ring.

The investigation began in July 2015 with the CBSA Criminal Investigations Section working closely with U.S. Homeland Security Investigations to monitor the activities of the four individuals suspected of participating in an international contraband smuggling operation.

They identified 34 mailboxes across the Lower Mainland and five mailboxes in Washington State that were used to receive drugs, which were then illegally sold in British Columbia and across the country. Once the mailboxes were known to CBSA, the agency was able to intercept shipments being sent to them.

In August 2016, the CBSA executed search warrants on the group’s three residences and one bank safety deposit box. This led to the discovery of mailbox contracts, shipping documents, fraudulent identification, wire-transfer receipts, over $40,000 in cash, more than a dozen cellphones, tablets and laptops, and an estimated $150,000 worth of anabolic steroids.

In total, the CBSA seized 121 postal and courier shipments of anabolic steroids and import-controlled substances. On separate occasions, the CBSA intercepted two of the accused in possession of these drugs at the Abbotsford-Huntingdon port of entry. The total estimated re-sale value of the drugs seized both at the port of entry and as part of the postal and courier shipments is $715,000.

All four members of the group were charged by the CBSA on February 28, 2019.

He was sentenced to a 15-month conditional sentence, 100 hours of community service, a $25,000 fine, plus 18 months of probation after he serves his sentence.

She was sentenced to a conditional discharge, provided that she successfully completes a 15-month probation order and 80 hours of community service.

He was sentenced to an 18-month conditional sentence, 40 hours of community service, a $25,000 fine, plus a further year of probation after he serves his sentence. He also received a mandatory firearms prohibition.

On September 12, 2019, Duane Barry Loewen pleaded guilty to smuggling under the Customs Act.

He was sentenced to 18 months’ probation and 50 hours of community service.

Anyone with information about suspicious cross-border activity can anonymously call the Border Watch Line toll-free at 1-888-502-9060.

Yvette-Monique Gray, Director, Enforcement and Intelligence Division, Pacific Region, CBSA, said: “The Canada Border Services Agency will not tolerate those who use our borders for illegal activity. We are firmly committed to prosecuting such individuals and groups who deliberately put Canadians at risk. Let this be a stern warning to anyone attempting to benefit from drug smuggling, or any organized crime.”

Harald Wuigk, Assistant Director, Criminal Investigations Section, Pacific Region, CBSA, said: “Our CBSA investigators dedicated years to investigate this group and ultimately dismantled their network of importing and selling anabolic steroids. They are committed to ensuring the health and safety of Canadians by prosecuting those seeking to smuggle harmful products into Canada.”