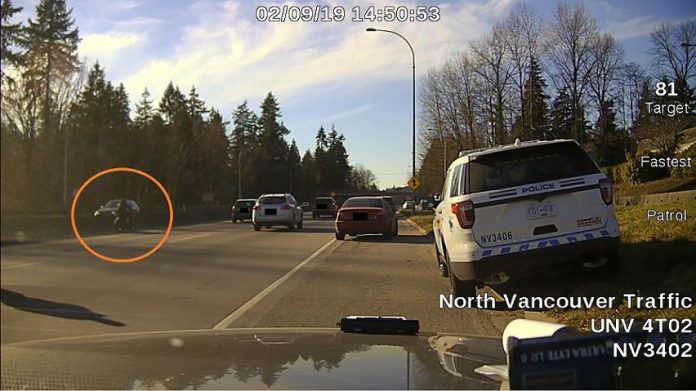 CHARGES have been laid against a North Vancouver man accused in an incident where an RCMP officer was injured when he was struck by a motorcyclist. Two charges were laid on May 10 in provincial court. Mark Daniel Webber, 27, is accused of one count each of obstructing a peace officer and dangerous operation of a motor vehicle. Webber is next scheduled to appear in court on May 29.

North Vancouver RCMP recommended the charges following their investigation of a February 9 incident during which an officer was struck and injured by a speeding motorcyclist who refused to stop when the officer flagged him down.

The officer, whose name is not being released, suffered traumatic brain injury as a result of the incident. “He spent more than a month off work,” said Sgt. Peter DeVries. “He wasn’t allowed to look at any screens for quite a while; no TV, no cell phones. He couldn’t do any strenuous exercise and he had to be monitored closely.” The officer is now making a graduated return to work and expects to return to full duties in the coming months.

“On February 9, we asked the public for help with this investigation, and a number of witnesses came forward,” said DeVries. “The information they gave us was instrumental in getting to this point.”