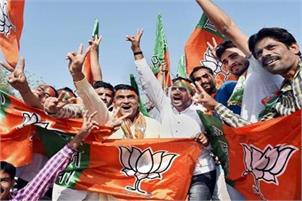 Lucknow (PTI): Ruling BJP swept the Uttar Pradesh civic polls bagging nine of the ten mayoral seats for which results were declared till evening on Friday (December 1) while leading in six others where the counting was in progress.

Opposition Congress again fared poorly, including in its bastion of Amethi, while the BSP had some reason to cheer as its candidate snatched the Aligarh mayoral seat, a traditional BJP stronghold.

In what was being dubbed as Yogi Adityanath’s first electoral test after he became the chief minister, the BJP bagged several prestigious mayoral seats including Ayodhya, Varanasi, Lucknow, Gorakhpur and was leading in several others.

In Saharanpur too BJP candidate Madan Walia fended off the challenge from BSP rival Fazlurehman to win by 2,000 votes.

The Adityanath government, soon after assuming office in March, had constituted two municipal corporations of Ayodhya and Vrindavan-Mathura.

BJP’s Ramtirth Singhal won the Jhansi seat defeating Brijendra Kumar Vyas of BSP by a margin of 16,373 votes. A setback for the Congress which had fielded former Union minister Pradip Jain Aditya, who finished third.

BJP also won in Firozabad where its candidate Nutan Rathore defeated Masroor Fatima of the All India Majlis-e- Ittehad-ul Muslimeen (AIMIM) by a margin of 42,396 votes.

In Bareilly, Umesh Gautam of the BJP trounced Iqbal Singh Tomar of the SP by 12,784 votes.

In Aligarh, however, BSP’s Mohammad Furqan wrested the saffron stronghold defeating BJP’s Rajiv Agarwal by a margin of 11,990 votes in what was virtually a direct fight.

Chief Minister Yogi Adityanath who went on a whirl wind tour of the state to ensure the victory of his party candidates, described it as a “historic win”.

Now the BJP will now look forward to achieving the goal of hundred per cent success in the 2019 Lok Sabha polls, he added. Adityanath said that the Congress had been wiped out in its bastion Amethi.

Finance Minister Arun Jaitley said that the results of Uttar Pradesh civic polls reaffirmed people’s support for the GST which has made doing business “easier” for traders.

A major blow was dealt to the Congress, particularly Rahul Gandhi, as reports from the UP civic polls confirmed a massive win for the BJP in Amethi.

Deputy Chief Minister Dinesh Sharma said the people of the state had shown full faith in the BJP while discarding the SP, the BSP and the Congress.

“The SP, the BSP and the Congress contested the polls as each other’s relatives. (SP chief) Akhilesh Yadav and (Congress vice president) Rahul Gandhi, who were together during assembly polls as ‘UP ke ladke’ have become like the “punctured” tyre and tube of a cycle,” Sharma said taking a jibe. He dismissed charges of EVM tampering as baseless.

“There was no shortcoming in EVMs, but it’s in their minds and party. They worked for a particular caste and people have discarded them. We are working for all, irrespective of caste, creed and religion and that has been accepted by the people,” Sharma said.

SP leader and MLC Rajpal Kashyap said it was “disheartening to note that the BJP gained on places where EVMs were used”. The SP is closely analysing the results, he said.

These elections are being viewed as a litmus test for the Samajwadi Party (SP), the Bahujan Samaj Party (BSP) and the Congress as well.

The BSP contested the urban body polls for the first time on party symbol, seen as an attempt by its chief Mayawati to stay relevant in a state she has ruled four times.

The state polled in three phases on November 22, 26 and 29 and the counting of ballots was held under tight security cover and CCTV surveillance at 334 centres in district and tehsil headquarters, the state election commission said.

Polling was held for 16 nagar nigams, 198 nagar palika parishads and 438 nagar panchayats with an average turnout of all the three phases estimated at 52.5 per cent of the 3.32 crore voters.