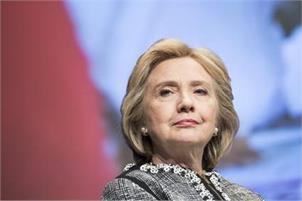 “I believe more fiercely than ever that citizen engagement at every level is central to a strong and vibrant democracy,” Clinton said announcing the launch of her group ‘Onward Together’.

“More than ever, I believe citizen engagement is vital to our democracy. I’m so inspired by everyone stepping up to organise and lead,” the former Secretary of State, said to her supporters as she urged them to contribute to the “remarkable” spirit of political activism.

The announcement comes as Clinton, 69, works to find a new role in an evolving political landscape.

The new group’s website said it aimed to advance progressive values and reminded visitors that Clinton had won nearly 66 million votes in November’s showdown with Trump.

“Onward Together will work to build a brighter future for generations to come by supporting groups that encourage people to organise and run for office,” wrote the former Secretary of State.

As of now, the new political action organisation would support five progressive groups: Swing Left, which targets vulnerable House Republican incumbents; Emerge America, which will train Democratic women to run for office; Colour of Change, which fights for criminal justice reform and racial justice; Indivisible, a group that’s mobilising a “resistance” against Trump; and Run for Something, which helps potential candidates find tools to guide their bids.

“This year hasn’t been what I envisioned, but I know what I’m still fighting for: a kinder, big-hearted, inclusive America. Onward!,” Clinton said in one of the series of tweets she wrote yesterday.

Hillary Clinton will do a good job on foreign policy: Poll