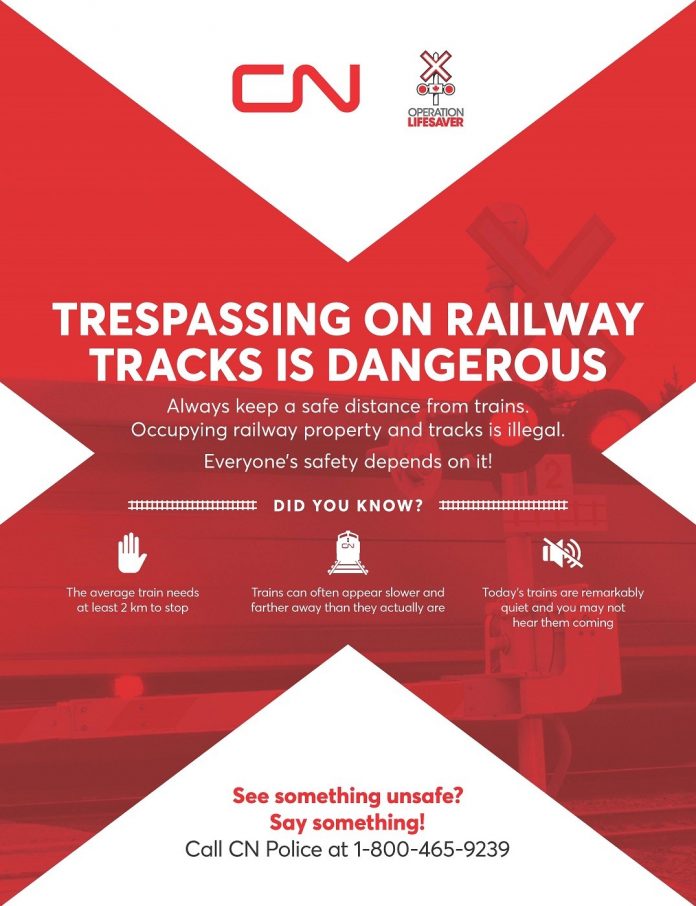 In 2019, B.C. had 28 railway crossing and trespassing incidents, 7 fatalities and 10 serious injuries.

AS we all return to recreational outdoor activities, the CN Police is reminding everyone that the only safe and legal place to cross train tracks is at a properly designated railway crossing.

Don’t forget that all railway yards, tracks, tunnels and bridges are private property and off limits to the public. Constable Peter Talvio of the CN Police Service has seen it all when it comes to trespassing including:  walking, jogging, biking, hiking, climbing, cliff jumping, camping, off road vehicles (ATV, dirt bike), horseback riding, fishing, hunting and berry picking.

Especially concerning are people that make the wrong decision to short cut through rail property to access their favourite recreational areas, walking along tracks, crossing yards, even climbing on, over or through parked trains. This is very dangerous as trains can move at any time and can result in serious injury or death.

Trespassing on or along rail lines is not only dangerous, it is also illegal under the Railway Safety Act of Canada and the Provincial Trespass Act. Saying that you were taking a short cut or engaging in a recreational activity is no excuse.

When approaching properly designated railway crossings, obey the crossing signs and signals. They are there to keep you safe.  Proceed through only when the warning signals have stopped and you have a clear view that no other trains are coming.

The CN Police Service will be on patrol in the community spreading the safety message through education and enforcement.  Spring is upon us and we need to be aware of our surroundings:   Look, Listen, Live!

STAY OFF THE TRACKS: It’s hard to judge how far away a train is or what speed it’s travelling at. Trains can go as fast as 160 km/h and can take up to 2 kilometres to come to a complete stop. That’s the length of 18 football fields.

USE DESIGNATED RAILWAY CROSSINGS: Always cross railway tracks at designated crossings. Trying to cross tracks anywhere else could be deadly. Remember, trains can come at any time, from either direction, and on any track. They also don’t always run on a set schedule.

OBEY ALL RAILWAY SIGNS AND SIGNALS: Obey all railway signs and warning devices, such as lights, bells and gates. Before proceeding through a crossing, look both ways and listen for approaching trains. If a train is coming, or railway warning signals are activated, stop behind any gates or stop lines—or no closer than 5 metres away from the nearest rail—and wait for the train to pass. Cross only after the warning signals have ceased and you are certain no other trains are approaching, from either direction, on any track.

STAY ALERT:  You can’t avoid getting struck by a train if you can’t hear it or see it coming. Today’s trains are extremely quiet, so don’t be distracted by cell phones or other devices when behind the wheel or in the vicinity of a railway crossing. Although trains sound their whistles at most crossings, or in the case of an emergency, you won’t hear the warning if you are wearing headphones.

KEEP YOUR DISTANCE: Trains can overhang the tracks by as much as 1 metre on each side. They can also carry loads that are wider than the railway cars themselves. So, stay clear. You could also get hit by chains, straps or other equipment if you are too close.

REMEMBER:  An optical illusion makes it hard to determine a train’s distance from you, or its speed. Trains are usually a lot closer than they seem—and travel a lot faster. A train hitting a car is like a car running over a pop can. The average freight train weighs more than 5.5 million kg. In comparison, a car weighs around 1,375 kg.