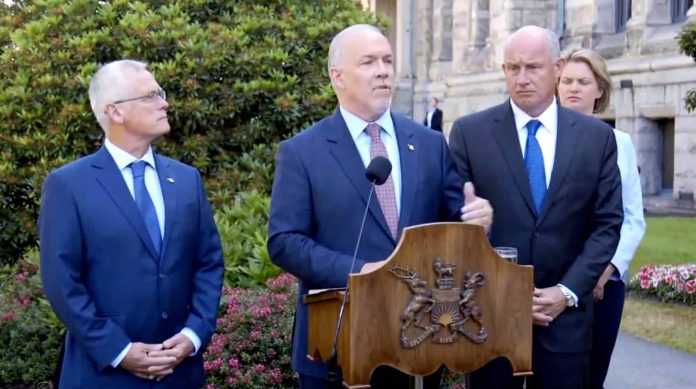 PREMIER John Horgan on Wednesday pledged his ongoing support for the people and communities affected by wildfires in B.C.’s Interior, as the cabinet met for the first time in Victoria.

“When we face difficult times, people and communities come together to help each other. Our government is stepping up our support of the people affected by the devastating wildfires in the B.C. Interior,” said Horgan.

British Columbia’s wildfire situation was the first order of business at the government’s first cabinet meeting on Wednesday morning.

The Province has extended the state of emergency to ensure a co-ordinated response to the wildfires, and has committed to provide ongoing direct financial support to evacuees. The current one-time $600-per-household funding will be renewed every 14 days on an ongoing basis until evacuees return home.

In addition, Premier Horgan has appointed a cabinet task force with the following members:

Donaldson, Farnworth and Rice will travel to the Interior on Thursday (July 20) to visit evacuees and local officials.

“A strong, co-ordinated response to the wildfires is our highest priority. To the evacuees, emergency responders, firefighters and volunteers: British Columbians stand with you every step of the way,” said Horgan.