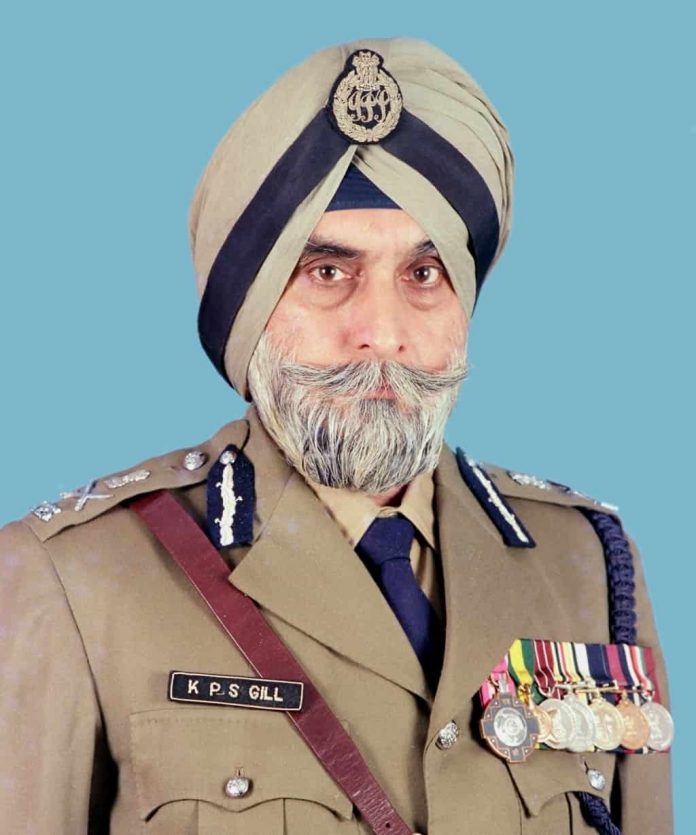 New Delhi: K P S Gill, who was seen as a “supercop” by some and as a person who disregarded the law in going after alleged terrorists by others, passed away on Friday, succumbing to a kidney ailment at the age of 82.

The IPS officer, who served as the Director General of Punjab Police twice during the peak of militancy, was considered an authority on dealing with security issues and even after his retirement, his services were utilised by the governments of Chhattisgarh and Gujarat states.

During the fight against terrorism under Gill, the Punjab Police faced a number of allegations of human rights violations.

He had also served as the Director General of Police in Assam and after his retirement, the benefit of his expertise was availed of even by Sri Lanka in the year 2000 during its fight against LTTE.

He breathed his last at 2:55 pm at the Sir Ganga Ram Hospital where he had been admitted on May 18 for kidney ailment.

“He was suffering from end stage kidney failure and significant ischemic heart disease. Gill had been recovering from peritonitis but died of a sudden cardiac arrest caused by cardiac arrhythmia,” said Dr D S Rana, Chairman of the Department of Nephrology and Board of Management of the hospital.

His death was condoled by Prime Minister Narendra Modi and many others across the political and security spectrum.

“KPS Gill will be remembered for his service to our nation in the fields of policing & security. Pained by his demise. My condolences,” tweeted Modi who was on a day-long tour of Assam.

An outspoken and daring officer who led from the front, Gill headed Punjab Police from 1988 to 1990 and then again from 1991 until his retirement from service in 1995.

He is credited with breaking the backbone of Khalistani terrorism in Punjab and finally eliminating it by adopting tough measures. He was accused by his critics of using illegal tactics.

He commanded ‘Operation Black Thunder’ in May 1988 to flush out militants hiding in the Golden Temple in Amritsar.

The operation was a huge success as little damage was caused to the holiest shrine of Sikhs, compared to ‘Operation Blue Star’ in 1984 carried out by the Army.

In Operation Black Thunder, around 67 Sikh militants had surrendered and 43 were killed.

After the 2002 Gujarat riots, Gill was appointed security adviser to the then Chief Minister Modi.

Taking over the job more than two months after the riots had started, Gill had requested deployment of 1,000 extra specially-trained riot police from Punjab state to combat the violence. He was credited with controlling the violence.

In 2006, he was made the adviser to the Chhattisgarh government to help control Naxalites.

However, the stint was not as successful as in Punjab since it was marred by a major attack by the naxals in 2007 in which 55 policemen were killed.

Gill also headed the Indian Hockey Federation (IHF) for several years, which too was surrounded often by controversies.

His career was tainted by charges of sexual harassment at a party in 1988 for which he was convicted in 1996.

Among other controversies faced by him were the allegations of corruption within the IHF in 2008, following which the Indian Olympic Association suspended the hockey body.