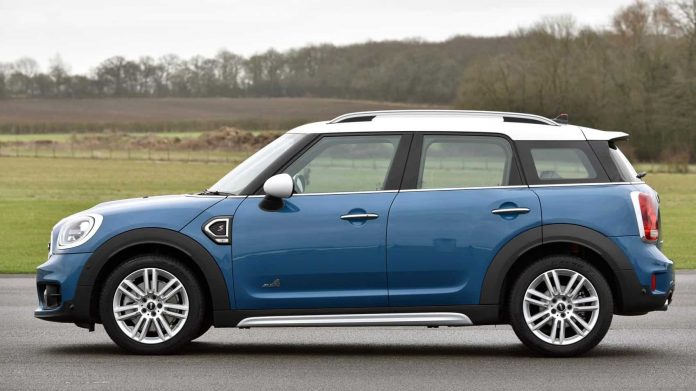 The 2017 Mini Countryman was the first production Mini with four doors and all-wheel drive when introduced in 2011. Fast forward to 2017 and the latest version of the new Countryman has grown up in term of size and versatility. Now built on BMW’s X1 CUV platform, the Countryman arrives with a choice of engines: the 136-horsepower, 1.5-litre turbocharged three-cylinder for the base Cooper (standard front-wheel drive, available All4) and a 189-hp, 2.0L turbo four for the S All4 and a high power 228 hp version for the John Cooper Works (JCW) version. In terms of transmissions, Front-drive is standard, but part-time ALL4 all-wheel drive is optional on both Cooper and S trims. A six-speed manuals is standard for both Cooper and Cooper S All4, with a six-speed automatic optional for the Cooper, or an eight-speed auto transmission for the S All4 (Part time All- Wheel drive. First off, the new Countryman is not only longer and wider; its taller than the previous generation, It is more impressive with updated styling. Our black tester, looked wonderful with its fully dressed chrome detailed exterior.

The Countryman’s cabin is reassuringly Mini themed, although its been redesigned and tidied up very nicely. Its less “bitty”, with a cohesion and design that seems more integrated than before. The big round center instrument is still there, with a cool color changing bezel around it. Going through the cabin, overall, materials look and feel better. Fit and finish is even more refined. Our fully loaded tester came with a very smart looking “British Oak Chester “Leather interior and a slew of options, far  too numerous too mention in limited column inches.  The Loaded Package ($1800) included: Automatic Trunk Comfort Access Auto Dimming Interior Mirror Electric Seats w/ Driver Memory.   Price as tested with options came to $44,880.

Interior wise, the Countryman’s larger dimensions make for a roomy cabin with excellent occupant space. The cabin is also far brighter and airy than the previous Countryman. There is comfortable headroom and legroom for five people.

Nothing much to complain about.  Mini’s are a premium product and have a lot of cache brand name imagery, and recognition. They start off not cheap, but attractively priced, and well equipped, but tend to get alarmingly expensive as you load on more options and customize your Mini. Highly recommended if the Mini thing is your thing!