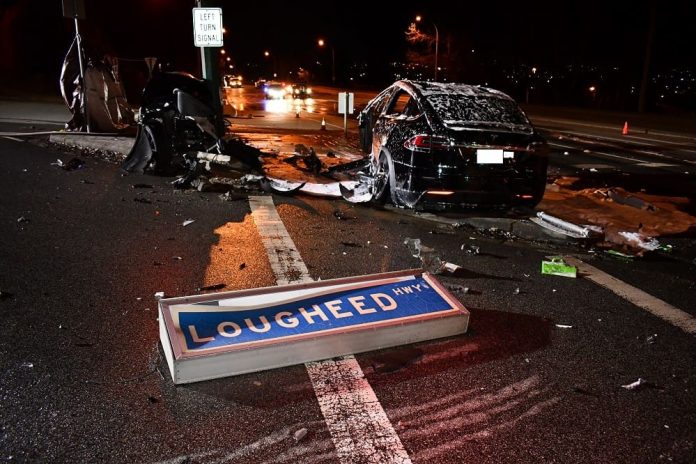 LOUGHEED Highway has been fully reopened after a fatal crash near Alderson Avenue in Coquitlam, but police are looking for your help to get a full picture of what happened.

On March 18, at approximately 1 a.m., Coquitlam RCMP responded to a single motor vehicle crash on Lougheed Highway near Alderson Avenue. Police located a severally damaged car that hit a traffic pole and was engulfed in fire. The driver was pronounced dead on scene. It is believed that speed was a contributing factor in the crash. The RCMP’s Criminal Crash Investigation Team and Integrated Collision Reconstruction Section were called out to determine the exact a cause of the incident.

“Anyone who was driving on Lougheed Highway just before 1 a.m. [on Monday] and saw a black Tesla Model X driving westbound is asked to call Coquitlam RCMP,” said Cpl. Michael McLaughlin. “We are particularly interested in dash cam video. We are also aware of people who were using cell phone cameras in the immediate aftermath of the crash. We’re asking those people to share that video with us instead of posting it to social media.”

The driver of the Tesla was the only occupant of the vehicle. Due to Privacy Act considerations, the name of the driver will not be released.