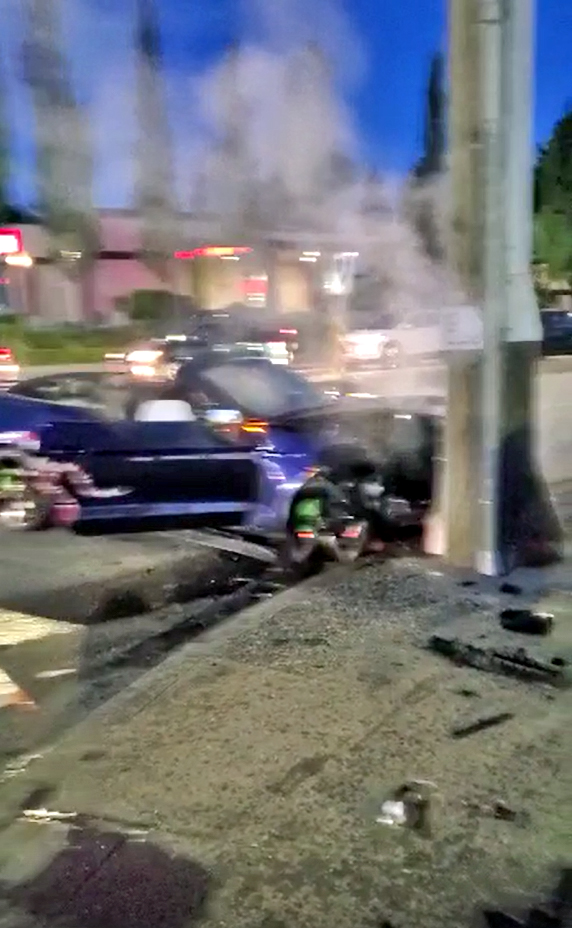 DELTA Police were called to the scene of a significant two-vehicle collision at approximately 9:15 p.m. on Sunday in the 7400-block of 120th Street in North Delta.

One vehicle had been travelling southbound on 120th Street when it collided with another vehicle turning westbound from 120th to the Mall Access road. One of the vehicles involved in the collision was pushed over the sidewalk and into Hydro boxes, at that point striking a pedestrian.

Each vehicle had four occupants in the car, for a total of nine people involved in the collision, including the pedestrian. Two of the occupants in one vehicle were young children.

“We’d like to thank the members of the public who assisted those involved in the crash, and who stayed on the scene to give statements to police. One of the vehicles was also on fire for a short period of time, and it was definitely a traumatic incident to witness.”

She said that anyone who witnessed the event and may need assistance can contact Delta Police Victim Services at 604-940-5019.

“We’d also like to acknowledge the efforts of our partner agencies, including BC Ambulance, Delta Fire Department, Delta Works and the Surrey RCMP, and their assistance with responding to this significant collision,” added Leykauf.

Roads were closed in the 7400-block of 120th Street until approximately 6 a.m. on Monday (August 10) when one lane re-opened southbound and all lanes re-opened northbound. Motorists can expect delays in the area as Hydro crews are anticipated to be on scene for hours, making repairs.

The cause of the collision remains under investigation.