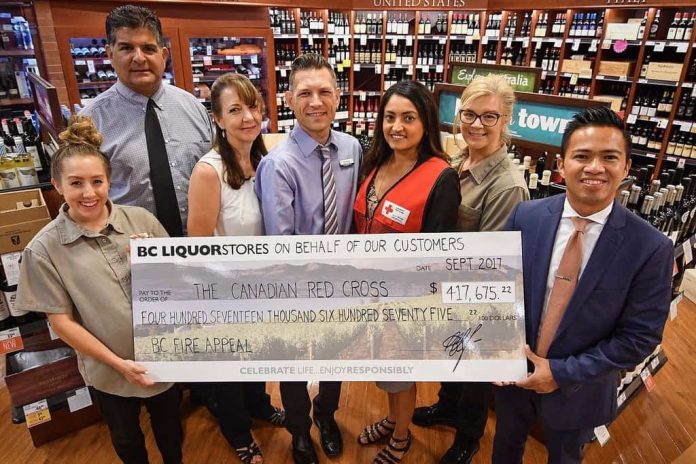 BC Liquor Stores’ customers donated a record-breaking $417,675 to the Red Cross BC Fire Appeal to help fellow British Columbians affected by the wildfires burning throughout the province.

Customer donations were collected over an eight-week period – between July 10 and August 31 – to support the immediate needs of wildfire evacuees with emergency food, water and shelter.

The BC Liquor Stores locations with the largest customer donations are:

Local liquor companies directly donated a portion of their proceeds on select products sold in BC Liquor Stores to the Red Cross as well, raising an additional $69,500.

Throughout its 14-year partnership with the Red Cross, BC Liquor Stores and its customers have raised nearly $3 million for humanitarian crises in Nepal, Haiti, Pakistan, Japan, Syria and Africa, as well as for disaster relief efforts closer to home in British Columbia in addition to Alberta and New Orleans.

Blain Lawson, General Manager and CEO, Liquor Distribution Branch, said: “I extend my sincere gratitude and appreciation for our customers and recognize the efforts of our BC Liquor Stores’ employees for supporting this important campaign. While our campaign has now come to a close, the wildfire season is not over and so I encourage everyone to continue to support the Red Cross by donating directly what they can, or by volunteering their time.”

Kimberley Nemrava, Vice President, Canadian Red Cross, B.C. and Yukon, said: “Our partnership with BC Liquor Stores and other community partners is vitally important to the Red Cross. Their donations have enabled us to provide additional assistance to 4,700 vulnerable families that were hit the hardest by the wildfires. Our communities are stronger because of the generosity of our donors and volunteers.”

BC Liquor Stores gives thumbs up for dry grad celebrations