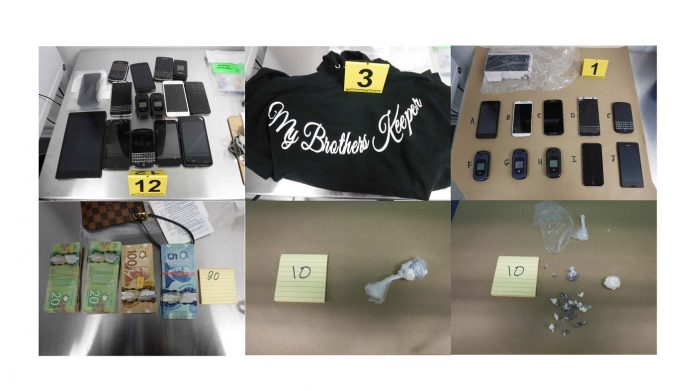 A significant flow of illegal drugs destined for the streets of Chilliwack has been seized by the RCMP during a police investigation of gang-related dial-a-dope activity.

On September 10, Chilliwack RCMP CRU supported by the Vancouver Police Department Organized Crime Unit, executed a Controlled Drug and Substance Act (CDSA) search warrant in the 5600-block of Boundary Road, Vancouver. Included in the articles seized by police during their search were items associating suspects and locations from other Lower Mainland communities to the alleged drug trafficking organization.

CRU officers continued to pursue their investigation, targeting dial-a-dope suspects, leading to the arrest of two people on October 23 during a police traffic stop in Chilliwack. Officers seized drugs believed to be fentanyl and crack cocaine while gathering further evidence to link the Lower Mainland locations to their investigation.

Further CDSA search warrants were executed on October 25 by Chilliwack CRU supported by the Vancouver Police Emergency Response Team at an address in the 1500-block of Hornby Street, Vancouver, the Burnaby RCMP Drug Section at residence in the 1000-block of Augusta Avenue, Burnaby, and the Surrey RCMP Drug Section at locations in the 7700-block 123A Street and the 15000-block 29A Avenue, Surrey.

Two people arrested during the execution of the search warrants were later released from custody.

Following a thorough examination of evidence gathered, all circumstances of the investigation will be forwarded in a report by the RCMP to the Public Prosecution Service of Canada (PPSC) for their assessment of CDSA charges.

“This was a complex multi-jurisdictional investigation conducted across several communities around the Lower Mainland by UFVRD CRU officers,” says Superintendent Bryon Massie, Officer in Charge of the UFVRD. “The removal of potentially lethal drugs from the streets of Chilliwack and other Lower Mainland communities will make a difference with a direct impact to this criminal enterprise.”

RCMP remind everyone who witnesses anything they believe to be suspicious in nature to contact their local police agency or, should you wish to remain anonymous, call Crime Stoppers at 1-800-222-8477 (TIPS).