TWO high-end BMWs were impounded and their drivers ticketed after racing and crashing this weekend, police said on Monday.

On January 15 at approximately 12 a.m., members from the North Vancouver RCMP traffic unit were conducting speed enforcement on Highway 1 at Westview Drive when they observed two BMWs in tandem, racing at a high rate of speed.

Using a speed measuring device, officers determined both vehicles were travelling at 145 km/h in an 80 km/h zone. They attempted to close the distance on the vehicles in an effort to conduct a traffic stop. As they approached the Lloyd Avenue off-ramp, officers noted the two vehicles, which appeared to have taken the Lloyd Avenue exit, had crashed into street poles and concrete barriers. 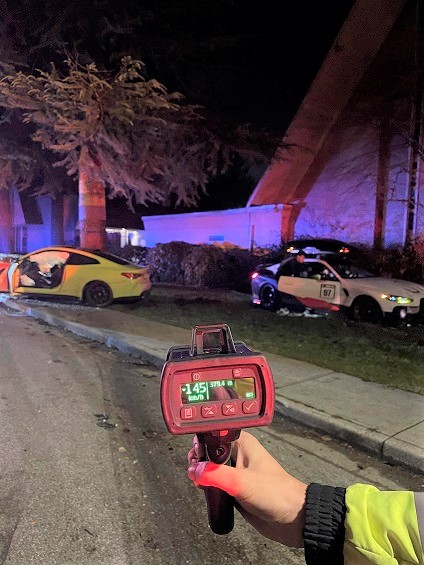 “Thankfully, none of the occupants, or anyone else who may have been on the road, were injured,” said Constable Mansoor Sahak. “But this certainly highlights the dangers of street racing and the costly and the potentially deadly consequences.”

The drivers, both of whom were males in their 20s, were issued tickets for ‘excessive speed’ and ‘drive without due care and attention,’ totaling over $1,500. Their vehicles were also impounded for seven days; however, both vehicles may well be written off due to the extent of damage, police said.

“Speed remains as the number one cause of death on our roadways,” said Sahak. “When it comes to speeding and dangerous driving, every death is a preventable death. We are committed more than ever to stopping irresponsible drivers through enforcement and education.”