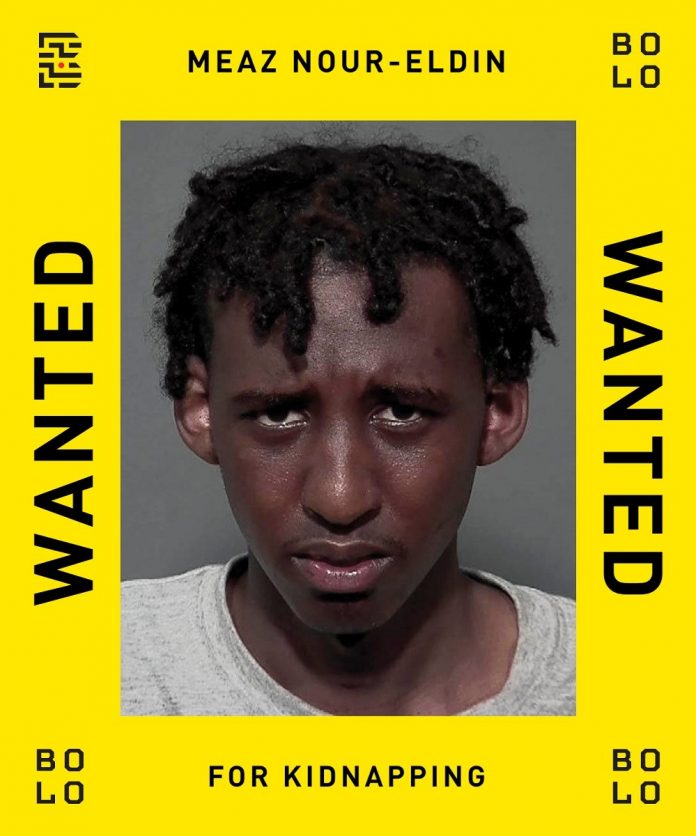 THE world became a bit smaller for Meaz Nour-Eldin as Surrey RCMP announced its collaboration with the Bolo Program on Tuesday. The hunt to locate and arrest Meaz Nour-Eldin on a Canada-wide warrant for kidnapping has been intensified as people from all over the country will now ‘be on the lookout’ for him, ready to claim the $50,000 reward for information leading to his capture.

These charges stem from an investigation by the Surrey RCMP Serious Crime Unit which began on July 4, 2019.  At approximately 7:30 that morning, police received a report of the alleged kidnapping of an adult male victim from Surrey. The victim was subsequently located the morning of July 5 and taken to the hospital for the treatment of non-life-threatening injuries.

As a result of the investigation police identified four suspects and charges of kidnapping, unlawful confinement, aggravated assault, robbery, and firearms offences were laid on July 25, 2019.

Three of those suspects have been arrested. A Canada-wide warrant for the arrest of Nour-Eldin was issued on July 29.

In addition to the charges Nour-Eldin is facing in Surrey, he is also wanted on further provincial warrants in British Columbia, Alberta, and Ontario related to drug trafficking, human trafficking, and sexual assault.

Since July, members of the Surrey RCMP say they have worked diligently to locate Nour-Eldin, gathering information here in the Lower Mainland and with the assistance of policing partners across Canada.  They say they remain committed to locating him safely and facilitating his entry into the court process.

Surrey RCMP has a track record of success in identifying and locating individuals as a result of making public appeals for assistance. Metro Vancouver residents have helped time and again, to bring criminals to justice by responding to our reports in the media and over social media. Now they are elevating and amplifying their public audience by collaborating with the Bolo Program who will bring nationwide attention to their hunt for Nour-Eldin. They are asking anyone with information to help them locate him to contact them. This time when you help them, you may be eligible to receive a $50,000 reward.

Surrey RCMP are not looking for witnesses or people to testify; this case is ready to go to trial. They’re just looking for the location of Nour-Eldin, so he can be apprehended and face justice.

“This is a message for Meaz Nour-Eldin: there’s nowhere to go and we will apprehend you sooner or later. So just do the right thing: call a lawyer, and turn yourself in. To the relatives, friends and associates of Nour-Eldin, I want to remind that you may faces charges for accessory after the fact if you assist Nour-Eldin in evading arrest,” said Inspector Cliff Chastellaine, Surrey RCMP Major Crime Unit.

Surrey RCMP point out that the public must take no action to apprehend Nour-Eldin. Anyone who sees him on the street is asked to call 911 immediately.

If you want to speak with police investigators, call them at 604-599-0502.  If you wish to remain anonymous, please contact Crime Stoppers. To be eligible for the $50,000 reward, report your sightings / tips to 911, Surrey RCMP or Crime Stoppers.

For more information on Bolo Program, visit their website.