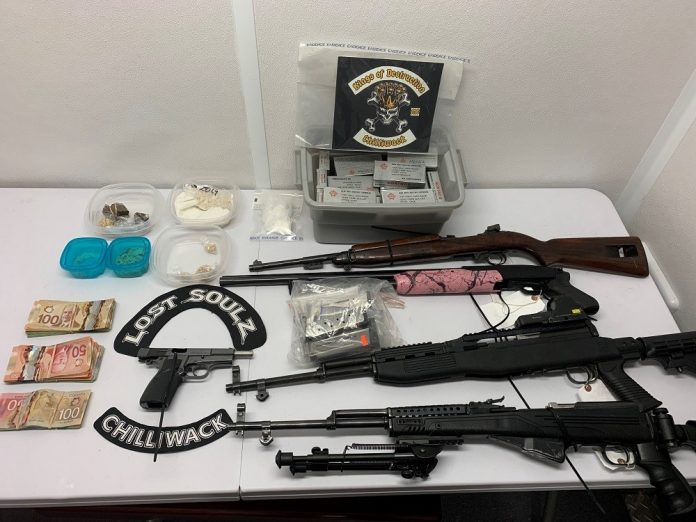 A seven-month RCMP investigation has led to the dismantling of an operation allegedly responsible for the flow of illegal drugs.

An investigation initiated in November 2019 by the Chilliwack RCMP Crime Reduction Unit Drug Section (CRU), targeted an individual suspected of supplying illegal drugs for trafficking in Chilliwack. Evidence gathered during their investigation led police to the execution of a succession of Controlled Substance and Drug Act (CDSA) search warrants of addresses in Chilliwack and Abbotsford linked to the street-level distribution of illegal drugs in the region.

On February 28, CRU, supported by Chilliwack frontline officers, Chilliwack RCMP Priority Target Team (PTT), and the Lower Mainland District Integrated Police Dog Section (IPDS), executed a search warrant of a residence in the 46000-block of Princess Avenue followed on March 31 by the execution of a search warrant at a second location in the 10000-block of Ponderay Street.

“During the execution of the search warrant on Ponderay Street a locker at another location was tied to the investigation,” said Cpl. Mike Rail on Monday.

Police later seized a cache of rifles, ammunition, and handgun magazines from the locker.

On May 7, CRU, supported by the Abbotsford Police Department Emergency Response Team (ERT) and Abbotsford frontline police officers, executed a search warrant of a residence in the 4600-block of Dixon Road, Abbotsford. Drugs believed to be cocaine and methamphetamine, cutting agents, paraphernalia associated to drug trafficking, and cash were seized by police.

Six people arrested during the execution of the search warrants were released from custody by police.

Following a thorough review of evidence gathered, all circumstances of the investigation will be forwarded in a report by the RCMP to the Public Prosecution Service of Canada (PPSC) for their assessment of CDSA and criminal charges.

“This complex investigation has led to the seizure of a very substantial quantity of illegal drugs and firearms which were destined for the streets of our community,” said Rail. “Criminals do not work within jurisdictional boundaries and neither do police, we are dedicated to the safety of our community no matter the jurisdiction.”

RCMP remind everyone who witnesses anything they believe to be suspicious in nature to contact their local police or, should they wish to remain anonymous, call Crime Stoppers at 1-800-222-8477 (TIPS).