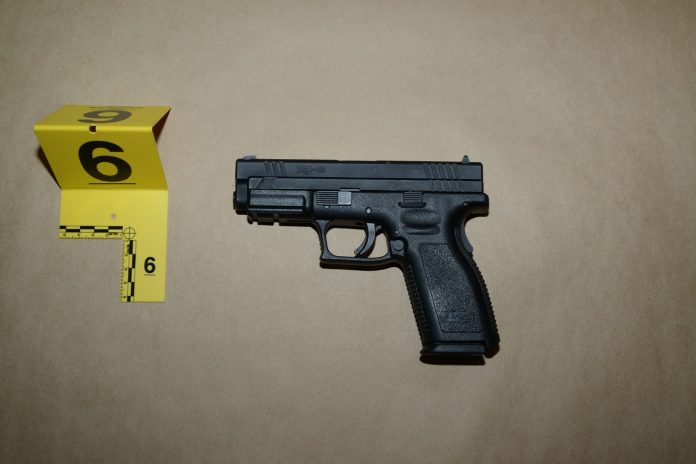 SURREY RCMP announced on Wednesday the arrest of two men with ties to the Lower Mainland Gang Conflict, and the seizure of a restricted firearm in Newton.

On September 26, the Surrey RCMP Gang Enforcement Team was conducting a proactive patrol in Newton when they observed a suspicious vehicle in the 6200-block of 126th Street. That vehicle, a black Jeep Cherokee, was observed committing multiple traffic infractions before colliding with another vehicle at 128th Street and 64th Avenue.

The three occupants of the Jeep Cherokee fled the scene on foot and two were arrested by police after a brief chase. A third suspect was not apprehended and the investigation is continuing. A subsequent search of the suspect vehicle yielded a loaded handgun.

Gurpreet Multani, 24, of Surrey is facing charges of dangerous operation of a motor vehicle, obstruction of a police officer, and fail to remain at the scene of an accident.

Both men are known to police, have links to the Brothers Keepers crime group and have been remanded in custody while the investigation continues.

“Targeted enforcement is enabling our members to make important interdictions like this one which has led to the arrests of two known gang members, and taken a loaded gun out of the hands of criminals.” said Inspector Mike Hall, Proactive Enforcement Officer.

Anyone with information about this incident is asked to call Surrey RCMP at 604-599-0502 or, if you wish to make an anonymous report, contact Crime Stoppers at 1-800-222-TIPS or www.solvecrime.ca.