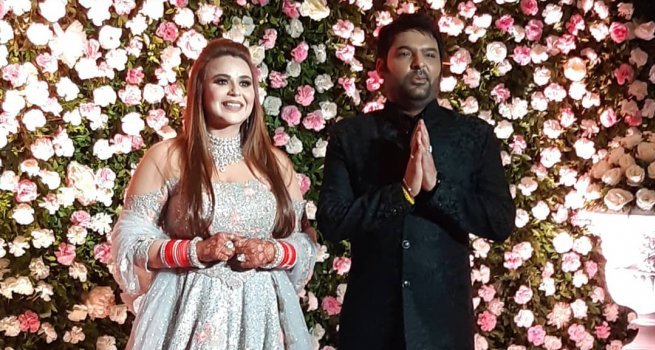 New Delhi  (IANS):  Designer duo Rimple and Harpreet Narula, known for their artistic contribution in the form of costimes for Sanjay Leela Bhansali’s “Padmaavat”, has not only crafted wedding outfits for actor Kapil Sharma and wife Ginni Chatrath but is also making clothes for their reception that is scheduled for Monday night in Mumbai. They called the opportunity a pleasure.

“There is something about the weddings in Punjab…the sheer bonhomie, joie de vivre and unrestrained joy of celebration, a certain inherent pomp that is unmatched.

“Punjabi brides, as well as grooms for that matter, have a deep rooted sense of pride and love for the rich cultural heritage of the region, and are keen on imbibing the same in their wedding trousseau. Kapil and Ginni were a pleasure to dress,” Rimple said in a statement.

Added Harpreet: “Working with Ginni and Kapil, and being a part of their journey was an absolute delight. We wish them the best.”

For the main wedding, Ginni wanted a classic red lehenga, says the designer.

“After a number of private consultations at our atelier, we zeroed in on an antique hand-painted Pichhwai that would be the inspiration behind her lehenga’s art work.

“The textile depicted a stunning riverside view of the Mathura Ghats which was meticulously translated on to each panel of the Lehengas to achieve a 360-degree view of the riverfront as it was in the past.

“The handcrafted skirt was rendered on tulle using Kashmiri-tilla, resham, sippi and sucha gota. It was paired with a blouse featuring a tessellated dabbi jaal derived from a Mughal jharokha and sheer tulle dupattas,” she said.

For Kapil, the designers wanted a restrained look albeit with a pop of colour.

“His sherwani was done in a lush old green taken from the shades foliage present in Ginni’s lehenga-scape. The silk jacket was first hand-pleated and then overlayed with a dabbi jaal using antique sippi and finished with a hand crafted marodi embroidery border.

“It was paired with a hand printed chanderi kurta-churidar and a pair of lavish juttis,” said Rimple

For their Mumbai reception on Monday night, Kapil and Ginni asked the designers to come up with a concept that is rich and traditional as well as modern at the same time.

“For Kapil, we have made a classic black silk bandhgala jacket paired with a pair of slim cut pants. The jacket features tonal resham thread embroidery, used as a painterly homage to depict an artwork of florals and foliage derived from the works of the iconic 19th century British textile designer William Morris. The look will be finished off with a pair of bespoke embroidered shoes,” said Rimple.

“Ginni’s reception lehenga will be a lavish ode to an archival 18th century European Chintz textile from our personal collection. The lehenga features a melange of motifs- birds of paradise, blooming lotus blossoms, brimming Vases of Plenty; rendered on tulle using delicate resham aari embroidery, chaawal-tanka stitches,nalki and nakshi, imported sequins,crystals and multi-hued pearls. The lehenga is paired with a sequin encrusted corset and wispy tulle dupatta,” she added.