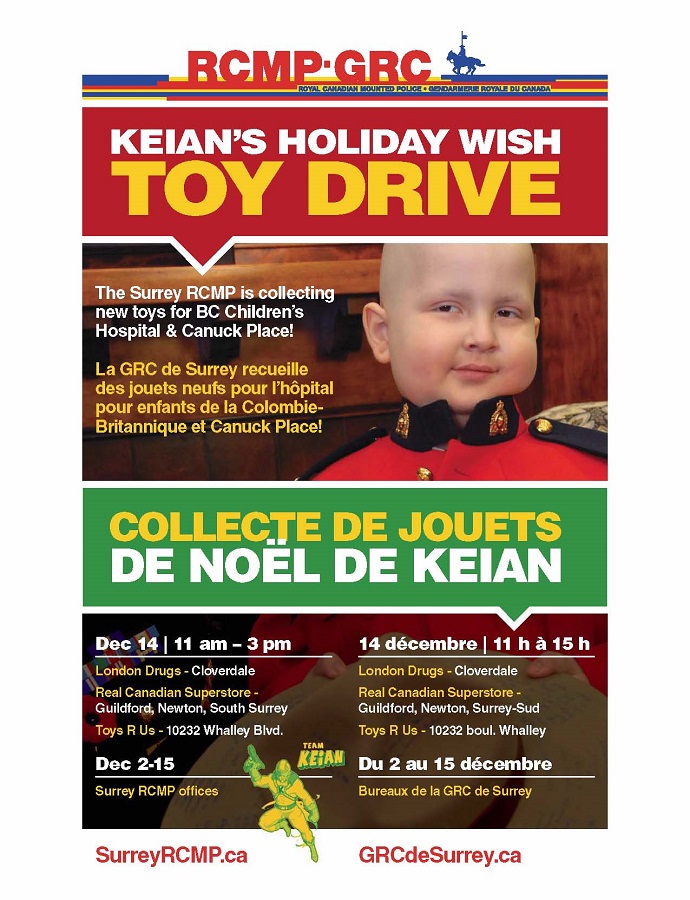 SURREY RCMP are hoping to make the holidays a little brighter for sick kids and their families by inviting the public to come out and support the annual Keian’s Holiday Wish Toy Drive.

Between now and December 15, Surrey RCMP will be accepting donations of cash or new, unwrapped toys for the BC Children’s Hospital and Canuck Place Hospice in memory of six-year-old Keian Blundell, who was made an honourary member of the RCMP before he passed away from leukemia in 2014.

Donations can be dropped off at Surrey RCMP’s Main Detachment or one of their four District Offices in Whalley / City Centre, Cloverdale and South Surrey (District 3 Newton office remains closed until 2020).

Officers, staff, and volunteers will also be accepting donations on December 14 at the following locations between 11 a.m. and 3 p.m.:

Keian’s Holiday Wish Toy Drive began in 2012 when Keian Blundell, who had T-Cell Acute Lymphoblastic Leukemia, was just five years old. Keian’s holiday wish was for every sick child to receive a gift during the holiday season. He lost his battle with leukemia in 2014, but his legacy lives on through this annual toy drive.

“Last year the Surrey RCMP and Surrey residents raised $8,750 in cash donations and over 1,000 toys for Keian’s Holiday Wish Toy Drive,” says Inspector Wendy Mehat, Community Support and Safety Officer. “The Surrey RCMP Community Response Unit is proud to continue the tradition of supporting BC Children’s Hospital and we invite the community to join us in carrying on Keian’s wish this holiday season.”

“The continuous, unwavering support we’ve had over the years has been nothing short of amazing. It’s wonderful to see Keian’s spirit of selflessness and giving continue to touch the hearts of so many people. He would be proud to see the continued efforts of the RCMP, an organization that so willingly adopted him into their family, as they join us in collecting new, unwrapped toys and gifts for children of all ages in his memory,” say Ryan and Chantal Blundell, Keian’s parents, “Keian’s Holiday wish may have started with a special young boy with a wagon full of toys, but it has grown to include many communities. He knew, no matter how old they were, kids deserved to experience some holiday magic, to have a smile brought to their faces. In our eighth year, with the help of the RCMP, we look forward to seeing their spirits and faces shine.”