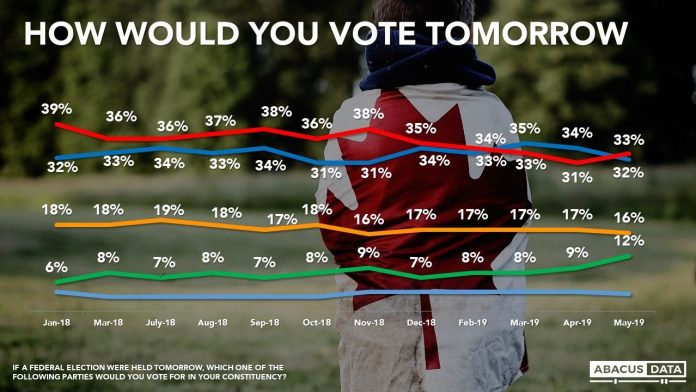 This week, we completed a nationally representative survey of 1,500 Canadians and explored their views on Canadian politics to update our regularly tracking. Early next week we will release an in-depth analysis of the Green Party’s rise and surrounding implications.

For now, here’s our view of the federal political landscape:

DIRECTION OF THE COUNTRY

APPROVAL OF THE FEDERAL GOVERNMENT

Today 32% approve of the performance of the Trudeau government, while 49% disapprove. These numbers are also basically unchanged from our last reading in April.

If an election were held tomorrow, 33% say they would vote Liberal, 32% Conservative, 16% NDP, and 12% Green. These numbers suggest some softening of Conservative support over the month, some strengthening of the Green Party, and an ongoing weak trend for the NDP. Today, the NDP trails the Green party in BC, Saskatchewan & Manitoba, and Atlantic Canada. In Quebec, where the NDP won 25% of the vote and 16 seats in 2015, the party is polling at 10% only two points ahead of the Greens and 34 points behind the Liberals.

We now see a pretty tight four-way race in BC, with the Liberals at 29%, the Conservatives at 28%, the Green Party at 18%, the NDP at 17% and the People’s Party with a notable 6%. The Greens appear to be eating into NDP support.

In Ontario, the Liberals have a 3-point edge over the Conservatives (33% to 30%), with the NDP back at 22% and the Greens at 12%. The People’s Party is at 2%. Compared to our last wave, this is a weakening of Conservative support and strengthening of Green Party and NDP support.

Among those who say they are most motivated to vote the Conservatives (35%) have a 3-point advantage over the Liberals (32%) followed by the NDP (15%), and 12% for the Greens.

When asked which of the party leaders they would prefer to see as Prime Minister after the next election, 33% picked Justin Trudeau, 30% Andrew Scheer, 19% Elizabeth May, 12% Jagmeet Singh, and 6% Max Bernier. This is a slight 3-point decline for Andrew Scheer, and a 5-point increase for Elizabeth May, who now polls better than the NDP leader in every region of the country on this question.

Currently, 33% say they have a positive view of Mr. Trudeau and 47% negative, which is essentially unchanged from our last wave. For Mr. Scheer, we find an increase in his negative numbers, up 4 since April while his positives are down 2. Overall, 35% view the Conservative leader negatively while 29% have a positive impression.

For Mr. Singh, we see 23% positive and 27% negative, mostly unchanged. For Ms. May we find 32% positive, 17% negative, a 5-point climb in positive ratings since April.

Worth noting is the fact that Doug Ford continues to show very high negative ratings nationally (55%) and in Ontario (61%). Among those open to voting Conservative, 26% have a positive impression compared with 37% who view him negatively. Among those who say they would vote Conservative today, 35% view him positively but almost as many (28%) have a negative impression of the Ontario Premier.

In Ontario, we have also seen a rise in Mr. Ford’s negatives. Last October, 48% of Ontarians had a negative view of the Premier. Today it is up to 61%, the highest we have tracked since we started regularly tracking Mr. Ford’s image. In the vote and swing seat-rich GTHA, only 20% have a positive view of Mr. Ford compared to 63% who view him negatively.

According to Bruce Anderson: “The race to this fall’s election features some really unusual dynamics with the role of the Green Party, the challenges facing the NDP, and the challenge to the Conservatives of the People’s Party all looking as though they could influence the outcome.

Perhaps the most important of the influences though may turn out to be the way Ontario voters feel about the Conservative brand. Doug Ford’s popularity is remarkably low, given the relative strength of the Ontario economy. He arrived in office with a significant amount of public skepticism and his spending cuts have added more controversy. Public interest in deficit-fighting has not been that strong in recent years, even though people wanted a more frugal government, it’s not clear that they expected to be seeing cutbacks on public services and programs.”

According to David Coletto: “As we have noted in the past, the federal political landscape remains very fluid. Almost 1 in 5 Canadians are open to voting for 3 or more of the main political parties. The rapid ascent of the Green Party in both vote intention and more importantly, vote consideration, is something we will watch very closely. Tune into more analysis next week on some additional questions we asked of those open to voting Green.

The damage of the SNC-Lavalin controversy to the Liberals persists but the Conservatives nor the NDP have not been able to take advantage of this opportunity. Instead, many more Canadians are now giving the Greens a look as Ms. May’s popularity grows. Given that one in five Canadians would now prefer her as Prime Minister is clear evidence of how fast things can change in this environment.

For the Conservatives, the silver lining in these numbers is the advantage they continue to have among more motivated voters. But relying along on motivating their base may not be enough to win the election. Despite the SNC-Lavalin controversy shaking lose some voters from the Liberals, the Conservatives have not expanded their tent at all over the past five months. In fact, there’s some evidence to suggest fewer Canadians are open to voting Conservative than earlier this year.”

Our survey was conducted online with 1,500 Canadians aged 18 and over from May 27 to 30, 2019. A random sample of panelists was invited to complete the survey from a set of partner panels based on the Lucid exchange platform. These partners are double opt-in survey panels, blended to manage out potential skews in the data from a single source.

The margin of error for a comparable probability-based random sample of the same size is +/- 2.6%, 19 times out of 20. The data were weighted according to census data to ensure that the sample matched Canada’s population according to age, gender, educational attainment, and region. Totals may not add up to 100 due to rounding.