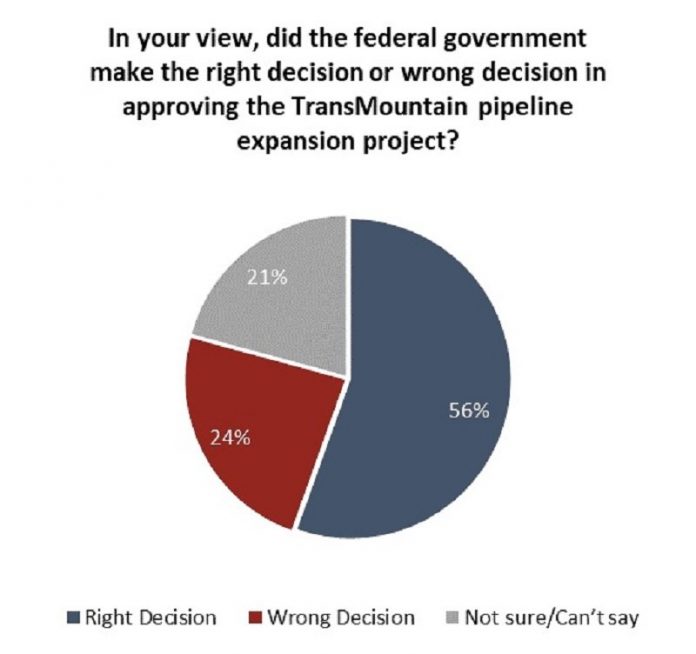 INDIGENOUS rights, economic debates, provincial tension, climate change and environmental protection; all of these are at the core of not only the TransMountain pipeline expansion (TMX) saga, but also the nearly four years of Justin Trudeau’s government, notes Angus Reid Institute.

The Liberals’ fortunes in October will likely hinge on their ability to convince Canadians of their triumphs, or at the very least, positive momentum, on these important files, and in this respect, the decision to approve the TMX appears for now, to be a political win.

A new study from the non-profit Institute finds that a majority of Canadians (56%) side with the government in its decision to approve the pipeline twinning, indeed, by a ratio of more than two-to-one versus those who disagree (24%).

How much public favour the government will gain from this decision remains to be seen, however, as the highest levels of praise come from Alberta (85%) and Saskatchewan (71%). Both provinces are projected to offer little electoral support to the Liberals in the forthcoming election.

Meanwhile, one-quarter (24%) say the government made the wrong choice, rising to three-in-ten in British Columbia (30%) and two-in-five (40%) within Quebec. Both of those provinces are considerably more competitive heading into the campaign.

While oil patch workers likely breathed a sigh of relief after the approval announcement, uncertainty about the fate of TransMountain still remains. British Columbia Premier John Horgan said immediately following the announcement that his government will continue to fight the project all the way to the Supreme Court.

Ultimately, six-in-ten Canadians (59%) say the expansion will be built, though four-in-ten are either unsure (28%) or disagree (12%). Notably, the percentage saying the project will be completed rises to seven-in-ten in B.C. (69%), where local protests have already begun.

* 58 per cent of Canadians say they support the TransMountain pipeline expansion, rising five points from 53 per cent at the beginning of this year. Support in British Columbia is statistically unchanged from January, at 54 per cent, while support in Alberta is highest in the country (87%)
* More than four-in-five Canadians who are considering the Conservative Party (85%) in the coming federal election say they support the TMX. This drops to 56 per cent among would-be Liberals, and one-in-three (33%) among those considering the NDP or the Green Party.
* The government’s performance in handling Canada’s pipeline capacity is a considerable source of division. One-quarter (27%) say the Liberals have struck the right balance in attempting to increase capacity, which includes approving TransMountain and the Line 3 replacement, while rejecting the Northern Gateway pipeline. The rest are divided evenly between saying the Liberals have done too little (37%) or have been pushing too hard on this file (35%).
* The primary concerns for Canadians, both those who support and oppose the TMX, are the possibility of a tanker spill due to increased traffic in the Burrard inlet (68% choose this) and the increased burning of fossil fuels from pipeline expansion (66%).