VANCOUVER Police are investigating after a man was seen downtown with a gun on Tuesday, October 19 and are appealing for witnesses to come forward.

“This is very concerning as we don’t know who this person is, if the gun was real or an imitation, and what the person was doing with the gun,” said Constable Tania Visintin on Thursday.

On October 19 at around 10:15 a.m., a man was seen by a witness walking north on Granville Street by Nordstrom holding and pointing what appears to be a gun. He then appears to engage with a person out of camera view, and makes cutting motions across his neck. Security footage shows him enter Nordstrom, put a mask over his face and walk through Pacific Center Mall. Officers were called to investigate an hour later. 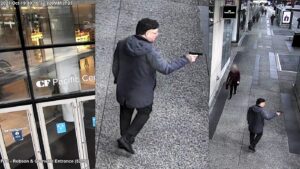 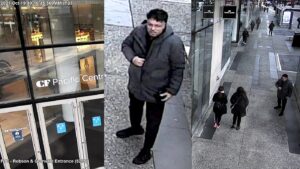 The suspect is described as white, 50 years old, five feet eight inches and 175 pounds. He has short, black curly hair, a dark goatee and was wearing eye glasses. He was wearing a dark grey jacket, black pants and black shoes.

If anyone recognizes this man, or if any one has any information, call investigators at 604-717-3445.