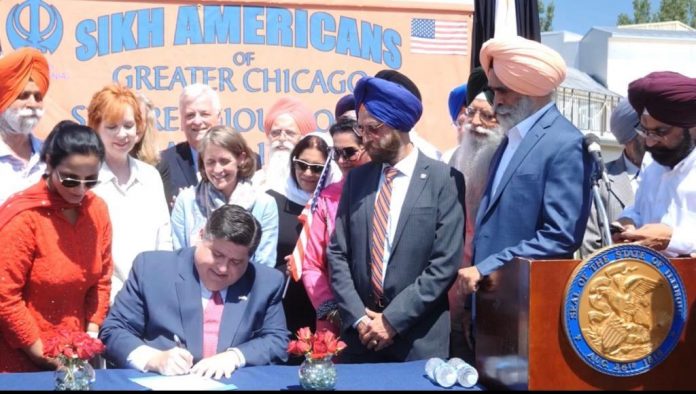 Governor J.B. Pritzker signs the Bill on the Sikh Gurdwara premises in Palatine

The event took place at Sikh Religious Society (SRS) Palatine Gurdwara. A mini outdoor office of the Governor was set up in the picturesque front lawn of the gurdwara building, near the “Nishan Sahib” to conduct the gubernatorial signing ceremony as per their official protocol and tradition.

Governor Pritzker was surrounded by overjoyed members of the Sikh community in the premises of the gurdwara near the “Nishan Sahib” when he signed the bill.

More than 200 Sikhs and guests attended the ceremony and celebration.

“As we shape our state to be a place that embraces our future with open arms, we would do well to take a page from the Sikh community. That’s why I’m proud to sign this legislation designating the month of April as Sikh Awareness and Appreciation Month,” said Governor Pritzker amid applause and cheers from the Sikh community members assembled on the premises of Palatine Gurdwara.

“As Sikhs throughout the world celebrate the 550th anniversary of the birth of their first guru, we celebrate you as an integral part of the Illinois community. We are tremendously proud that so many Sikhs call this state their home,” tweeted Governor Pritzker. “I hope the new law will provide greater understanding of the Sikh community,” he added.

The HB2832 Bill had first passed the house vote bearing signatures of the Speaker of the House of Representatives Michael J. Madigan, and the Senate President John J. Cullerton.

State Representative Michelle Mussman sponsored the bill which was co-sponsored in the House by State Representatives Fred Crespo, Stephanie Kifowit, Tom Morrison, and Jonathan Carroll and supported by many others, including Mark Walker, Mark Kalish, Karina Villa, Theresa Mah, and Jennifer Gong-Gershowitz.

The bill was filed in the Senate by the Senate President John Cullerton and supported by Illinois Senators Ann Gillespie, Laura Murphy, Laura Ellman, Ram Villivalam, among many others. The bill passed in both houses. The governor’s signatures on August 3 made it a law. The law takes effect on January 1, 2020.

State Representative Michelle Mussman expressed her pleasure to sponsor the house bill HB2832 and praised the Sikh community for their core values, contributions to the society, and service to humanity.

Sikh Religious Society Palatine President Dr. Pardeep Singh Gill welcomed and thanked the governor and the guests. President Gill explained the significance of the month of April for the Sikh community. It includes “Khalsa Saajna Divas” (birth of the Khalsa order) and also birth of the founder of Sikh faith Guru Nanak Dev. A Punjabi cultural festival of “Vaisakhi” also falls in April.

Rajinder Singh Mago spoke about the significance of the bill to the Sikh community and introduced the governor.

“Signing into law the very important designation of Sikh Awareness month shows Governor J.B. Pritzker’s commitment to ensuring that Sikhs in Illinois are an important and valuable part of our growing society.” said Mago. “It also helps us combat the challenges we face everyday when it comes to hate crimes, bias and a lack of understanding about our faith and religious articles,” Mago added.

A poster depicting the bravery of Sikh Soldiers in World Wars I and II was presented to the governor as a token of appreciation by Sarwan Singh and S.R.S. President Dr Pardeep Singh Gill.

According to Wikipedia: “Illinois a state in the Midwestern and Great Lakes regions of the United States. It has the fifth largest gross domestic product (GDP), the sixth largest population, and the 25th largest land area of all U.S. states. Illinois has been noted as a microcosm of the entire United States.”