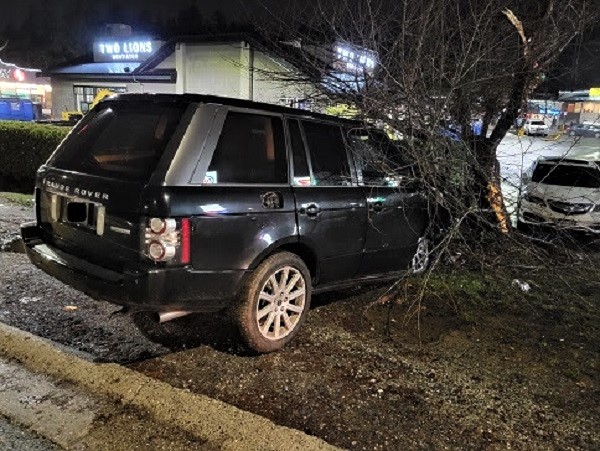 NORTH Vancouver RCMP are appealing to the public after a motorist fled from police on New Year’s Eve and crashed a short time later.

On December 31 at 7:30 p.m., police observed a black Land Rover swerving near East 19th Street and Grand Boulevard East. Officers attempted to conduct a traffic stop for traffic violations, but the vehicle refused to stop and fled at a high rate of speed, weaving dangerously in and out of traffic. Due to the risk to public safety, officers did not pursue the vehicle.

A short time later, witnesses reported a black Land Rover involved in a collision with a tree on Westview Drive on-ramp to Highway 1. It is believed that was the same vehicle that had fled from police.

North Vancouver RCMP officers along with Police Dog Services and RCMP Air 1 were deployed to assist in locating the driver who fled from the scene of the accident. The driver was located a short distance away and was arrested. The driver, a 61-year-old man from West Vancouver, is facing numerous charges including refuse to provide breath sample, dangerous operation of a motor vehicle, and flight from police.

“Although we have made an arrest, it’s very important that we continue our efforts to gather all available evidence,” said Constable Mansoor Sahak. “We are looking for witnesses from two separate areas who may have seen the black Rand Rover flee and then crash.”

Police are also asking anyone with dash cam or surveillance video to come forward. “Your surveillance camera may have captured something. Please check,” added Sahak.