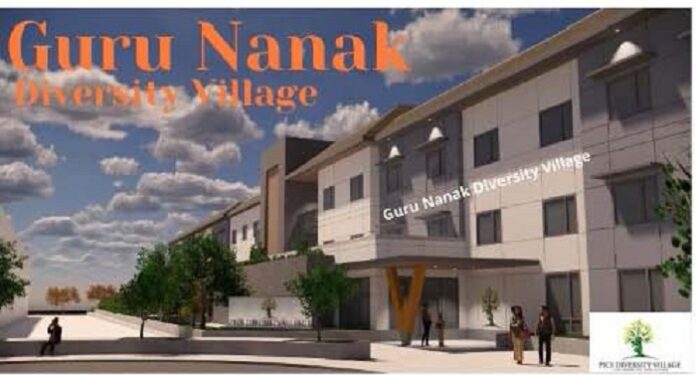 Guru Nanak is one of the greatest religious, political and social reformers who appeared in the middle of the fifteenth century and, as many scholars have observed, ushered in a new era of renaissance that began to dawn upon the Asian continent. Guru Nanak initiated a movement to champion for human rights with a mission to denounce discrimination and espouse the doctrine of ‘Sewa’, meaning ‘selfless service’; which involves acting selflessly and helping the underserved without any reward or personal gain. This year is the 550th birth anniversary of Guru Nanak Dev Ji.

The PICS’ Board has passed a special resolution to name the building as ‘Guru Nanak Diversity Village’ to dedicate the facility to his ideals of “equality of all human beings, irrespective of birth, gender, caste or colour” and his universal message that “there is one God and one human race.”  The new name was announced at the PICS’ AGM on Sunday, September 27 and was unanimously acclaimed, approved and adopted at the meeting.

“We asked everyone at the AGM to make pledges to name rooms within the ‘Guru Nanak Diversity Village’ building in the names of their loved ones and within five minutes we received pledges for more than $250,000,” said PICS President and CEO, Satbir Singh Cheema. “PICS, in its service to the community for over three decades, has strived to create a more inclusive and respectful society. it is a matter of immense pleasure and honour for us to name the PICS Diversity Village after Guru Nanak to symbolize our rededication to the commitment to continue to tread the path shown by him. I believe that ‘Guru Nanak Diversity Village’ is perhaps the biggest project to be built outside of the Indian subcontinent to commemorate Guru Nanak’s 550th birth anniversary.”

‘Guru Nanak Diversity Village’, located at 6471 175A Street, is a partnership between the Ministry of Health, Fraser Health and PICS, it will be a three-storey, 125-bed residential care facility that will provide culturally sensitive long-term complex care to seniors with a South Asian background. The facility will employ diverse staff to communicate with the residents in their mother tongue. The residents will be served familiar food. They will be able to practice their religion and celebrate their cultural events, and they will freely enjoy their normal activities as if they were living in their own homes. The total capital cost of the project is expected to be $58 million, with PICS providing $5 million in fundraising for the construction. Once open, the Ministry of Health, through Fraser Health, will provide operational funding on an ongoing basis for care services.