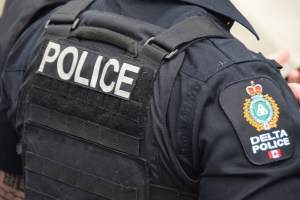 DELTA Police are advising the public to be sure to take precautions when entering their bank card and credit card PIN numbers while out shopping.

On July 9, a senior shopping in Tsawwassen Commons entered her PIN number at a store in the area. She did not realize she was being followed by a woman who apparently was able to observe her entering her PIN code when she paid for her purchases.

The senior left the store, and then was approached by the woman, who held out a $10 bill, asking the senior if she had dropped it. She was quite insistent that the senior check her wallet, and drew quite close to the senior during this process, which made the senior uncomfortable.

“The key takeaway we want to share is to make sure that you hide your PIN code from everyone, whenever you enter it,” says Cris Leykauf, spokesperson for Delta Police Department. As this senior was apparently targeted, she asks that people share this information with the seniors in their lives.

Both the credit card company and police are investigating this incident.