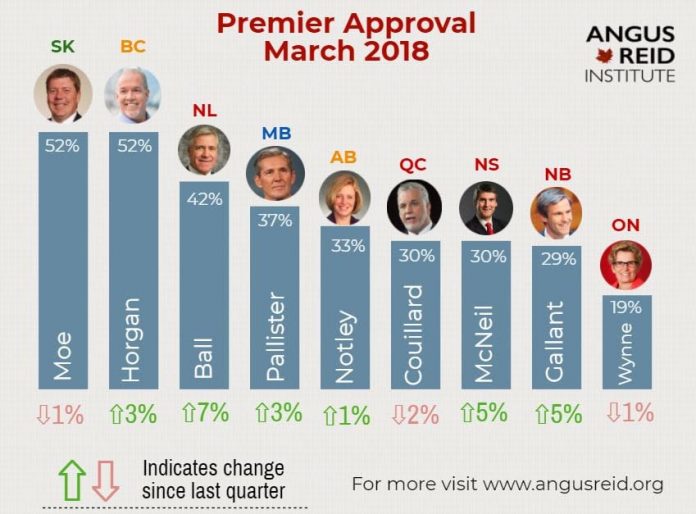 ON Monday, a new Mainstreet Research poll found that B.C. Premier John Horgan and the BC NDP maintain a lead of slightly more than five points over the BC Liberals. Horgan maintains roughly the same lead over the Liberals as he had in January, according to Quito Maggi, President and CEO of Mainstreet Research.

On Wednesday, Horgan got another boost when this quarter’s analysis of polling data from the Angus Reid Institute showed that Horgan and newly-sworn premier Scott Moe of Saskatchewan enjoy the highest job performance approval ratings in their provinces among all premiers in Canada at 52 per cent. For Horgan that is a three-per-cent increase since the last quarter.

The Angus Reid Institute noted: “Horgan, in office since July 2017, has spent the last few months embroiled in inter-provincial trade conflict with Alberta Premier Rachel Notley stemming from a dispute over pipelines.”

It added: “But the battle between western neighbours appears to have done no harm to either provincial leader: Horgan received a three-point bump in approval, tying him with Moe (52%) for the distinction of Canada’s most popular premier, Notley’s approval remains statistically unchanged, with the approval of one-in-three Albertans (33%).”

For Ontario, the Angus Reid Institute noted: “It’s crunch time in Ontario with a June election date looming over Liberal leader and Premier Kathleen Wynne. With just under three months to go the picture looks bleak for the incumbent. While approval is no substitute for vote intention, it can be a harbinger of things to come. Despite some policy wins with voters on the minimum wage and electricity rates cuts, among others, Wynne still hasn’t been able to soften potential voters. Just one-in-five Ontario residents (19%) say they approve of her performance.

“Regardless of the chaos and confusion that was the Progressive Conservative Party of Ontario’s leadership race, polls show new PCPO leader Doug Ford with a healthy advantage over Wynne in vote intention.”

A look at diversity and racism in Canada